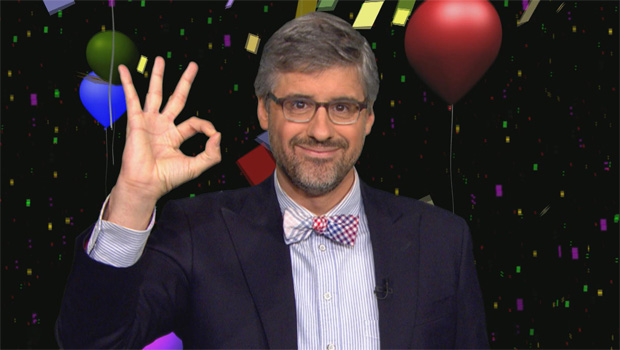 O.K. is a pair of initials with a multitude of uses -- not to mention a number of different explanations of how it came to be. An upcoming anniversary is the occasion for Mo Rocca to investigate:

Word up! Next Sunday, March 23rd, is the 175th anniversary of the invention of a word that English professor Allan Metcalf believes is America's most successful export.

"There's no other word that is widely recognized throughout the world," he told Rocca. "No other American word has succeeded like that."

If you don't know what that word is, it's OK.

For Metcalf, the world's foremost "OK expert," one reason for OK's appeal is its versatility.

So just where did this word come from? For years, its origin was a linguistic mystery.

One theory: it came from the Greek phrase "ola kala," which means all good.

And then there's the Choctaw word "okeh," which sounds like and means okay. President Woodrow Wilson reportedly thought it was the "correct" spelling of the word, and would OK documents with "okeh."

And finally, the most famous OK origin story was reinforced in the 2012 Academy Award-winning movie, "Silver Linings Playbook":

PAT: "Here's a fun fact. You know where the term 'OK comes from?"
VERONICA: "No. No, I don't."
PAT: "Well, Martin Van Buren, the eighth president of the United States of America, is from Kinderhook, New York . . . and he was part of a club, a men's club, called Old Kinderhook. And if you were cool, you were in the club, they'd say, 'That guy's OK.' 'Cause he was in the Old Kinderhooks."

OK, the real story of OK is hilarious.

Now while President Van Buren wasn't the origin of OK, the man known as Old Kinderhook did have a hand in popularizing it.

"You have to feel a little bit bad," said Rocca, "because 'OK' was kind of Martin Van Buren's only claim to fame."

"Yes, well, I think if you go to Kinderhook, they still have plaques and announcements, that that was the origin of 'OK,'" said Metcalf. "

"They're not okay with your origin story?" Rocca said.

"That's right. But it's okay if they wanna do it."

The earliest appearance in a dictionary that we could find was in an 1864 edition of the Slang Dictionary of Vulgar Words.

But today, does OK hold its own against that other common utterance -- "like"?

In the battle of "like" versus "OK," Metcalf said, "OK comes out way out on top -- and underneath, too. Like is so wussy. All it does is just give a little bit of affirmation. OK has a much broader range."

OK is used around the globe, but Metcalf says that the word born in America expresses a quintessentially American philosophy: "You never will say anything is OK if it's not satisfactory," he said.

"Okay -- and this 'okay' is expressing skepticism right now. That feels like it equals mediocrity," said Rocca.

"It allows for mediocrity, but mediocrity that succeeds," Metcalf said. "Because Americans figure out how to get things done rather than waiting for perfection."

"Okay," said Rocca, "by which I mean I accept what you're saying."

Funny that a word so common appears in only one famous quotation: "I'm okay, you're okay."

OK -- never a star attraction, but always in a supporting role.

"It's emphatic, it's distinctive, it's simple," said Metcalf. "Americans don't like complicated philosophies or ways of life. And 'okay' is about as short and simple as you can get."

So, pencil next Sunday in as OK Day!