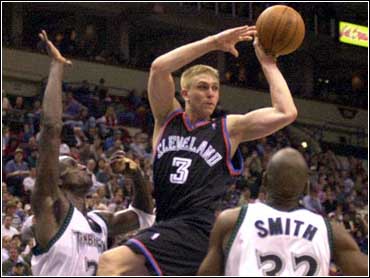 There was a time when a 40-victory season meant the world to the Minnesota Timberwolves.

Just three months ago, the Wolves were 7-13 and hurting.

"At that point, you're hoping to get to 40 by the end of the year," Saunders said. "You're not thinking you're going to be there with 16 games to go."

At 40-26, the Wolves are 14 games above .500 for the first time in their 11-year history. Before this week, they'd never been more than a dozen games up in the win column.

But the Wolves aren't ready to relish in their success just yet.

"This organization is not going to be satisfied with another good regular season," said Terrell Brandon, who had 24 points and tied his career-high with 16 assists.

The Wolves have been first-round playoff fodder for three years running and desperately want a solid finish to gain the home-court advantage for at least one series in the playoffs.

"That would be a great thing in the progression of our team," Saunders said.

Kevin Garnett added 29 points as the Wolves spoiled the return of Cavs' first-year coach Randy Wittman, who served as an assistant in Minnesota from 1994-99.

Afterward, Garnett hugged Wittman, whose struggling team went into overtime for the third time in a week.

"I'm just told him good game, try to keep his head up," Garnett said. "I know Witt. He's just like us after a loss. He doesn't like to say too much. We're still friends, but we're still competitors."

Wittman wasn't thrilled with the rude reception the Wolves gave him but said he enjoyed his retun nonetheless.

"I'm very close to everyone here," he said. "I keep a close eye on them. I follow them. There's good people here associated with this organization and it was special to come here and special to have them come to Cleveland."

Garnett's two free throws at 8.6 seconds made it 109-105, but Bob Sura's rebound basket with two seconds left made it a two-point game again. Brandon was fouled with nine-tenths of a second left and sank both shots.

"Terrell and KG took charge in the fourth quarter," said Shawn Kemp, who sprained a ligament in his right ring finer on a jump ball in the first quarter but still finished with 15 points.

Lamond Murray's 16 points led the Cavs, who also got 15 from Wesley Person.

There were no points scored in the final 2:13 of regulation.

With less than 20 seconds left in the fourth quarter, Danny Ferry stuffed Malik Sealy, who appeared to get fouled by three players on his way to the basket. But no call was made and Sura got the rebound for Cleveland.

After a timeout, Miller drove to the basket but was stuffed by Wally Szczerbiak, sending the game into overtime.

Kemp picked up his sixth foul on Garnett's basket with 2:13 left in regulation, and Garnett's free throw tied it at 99, erasing the final remnants of the Cavs' 12-point third-quarter lead.

The ball was bouncing Cleveland's way before that. In the third quarter, Sealy fell down and inadvertently kicked the ball into the hands of Person, who swished a 3 for a 74-63 lead.