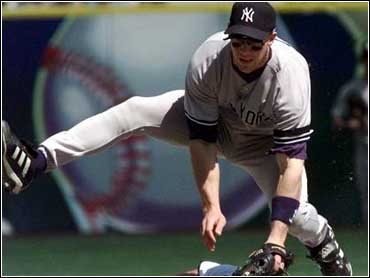 They still have the worst record in the majors. But two straight wins over the defending World Series champions have the Detroit Tigers feeling a lot better about themselves.

Detroit (11-23) has scored 15 runs in two wins over the Yankees after scoring just two in its previous four games.

The Tigers are assured of winning just their second series this season. They took two of three from Seattle in the first series at Comerica Park on April 11-13.

"To heck with the series," Detroit manager Phil Garner said, looking ahead to the weekend finale Sunday. "I want to win three in a row. We haven't done that yet, have we?"

Detroit hasn't won three straight since a six-game winning streak last September. But Gregg Jefferies, who was 2-for-2 with two walks and two runs scored, said it's not imperative to sweep the Yankees.

The Yankees lost their third in a row, their longest skid of the season. They still have an AL-best 22-12 mark.

"Teams come out to play us, there's no doubt about it," New York's Paul O'Neill said. "When we come to town, they come to play. If we don't play a good, solid game, we're going to get beat. That's just the way it is."

Macias, 5-for-9 in the series, performed impressively in spring training but was sent to Triple-A Toledo when the Tigers decided to keep Jefferies and Shane Halter as their extra infielders. Macias was called up May 3 and made his second straight start at second base in place of Damion Easley, who went on the disabled list Friday with a broken wrist.

"I just like his aura," Garner said. "He doesn't seem to be worried about anything. It just seems like something's going to happen when he's around."

Weaver (1-4) allowed three runs one earned on seven hits. He struck out five and walked two.

"Each pitch is definitely a key pitch against those guys, and things seemed to work out today," Weaver said.

Todd Jones pitched the ninth for his ninth save of the season and second of the series.

"He was struggling," Yankees manager Joe Torre said. "A lot of pitches were belt-high. He needs to live around the knees."

It marked the second straight day a Yankees starter lasted less than five innings. Roger Clemens was knocked out after allowing six runs in 4 2-3 innings of the Tigers' 9-7 win Friday.

Both teams struggled with a stiff wind blowing mainly to left but often swirling around Comerica Park.

"It reminded me of Candlestick Park out there," Torre said.

O'Neill, playing right field, saw a seemingly routine, two-out fly ball from Dean Palmer blow back and fall in front of him as a run scored in the Tigers fourth.

"It was just like somebody threw it straight down back to the infield," Pettitte said. "It was crazy."

Bernie Williams hit a fly ball that Tigers left fielder Rich Becker first charged and then saw sail over him in the sixth. Becker was charged with an error, and Tino Martinez followed with an RBI single that cut the Tigers' lead to 6-2.

The strangest play was turned in by Detroit catcher Brad Ausmus. He first chased a ninh-inning foul popup from Scott Brosius to his right, backpedaled as the wind carried it left and caught the ball while falling flat on his back.

Brosius hit an RBI single that gave the Yankees a 1-0 lead in the second.

The Tigers answered with four in the home half as Macias hit a two-run triple, Ausmus an RBI double and another run scored on Pettitte's second throwing error of the day.

Palmer's wind-aided hit made it 5-1 in the fourth, and Pettitte exited in the fifth after two singles and Luis Polonia's sacrifice fly gave the Tigers a 6-1 lead.

Run-scoring singles from Martinez in the sixth and Chuck Knoblauch in the seventh finished the scoring. Knoblauch's RBI was just his third of the season, with the others coming in back-to-back games April 15-16 against Kansas City.