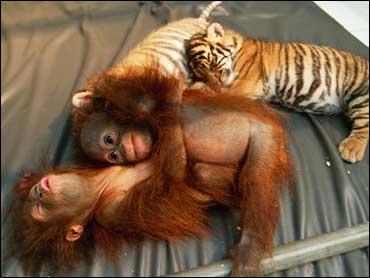 Call them the odd couples. A pair of month-old Sumatran tiger twins have become inseparable playmates with a set of young orangutans, an unthinkable match in their natural jungle habitat in Indonesia's tropical rainforests.

The friendship between 5-month-old female baby primates Nia and Irma, and cubs Dema and Manis, has blossomed at the Taman Safari zoo where they share a room in the nursery.

After being abandoned by their mothers shortly after birth, the four play fight, nipping and teasing each other, and cuddling up for a shared nap when they are worn out.

"This is unusual and would never happen in the wild," said zoo keeper Sri Suwarni, bottle-feeding a baby chimp on Wednesday. "Like human babies, they only want to play."

The four have lived side-by-side for a month without a single act of hostility, she said.

Indonesian tigers and orangutans are both endangered species, threatened by rapidly shrinking habitats.

Conservationists estimate there are fewer than 700 Sumatran tigers still alive, while fewer than 60,000 orangutans remain in the wild. Around 90 percent of the jungle has been destroyed by illegal logging, poaching and cut-and-burn farming practices on Borneo and Sumatra islands.

The exceptional friendship will likely be short-lived, said veterinarian Retno Sudarwati, because as the animals grow up their natural survival instincts will kick in.

"When the time comes, they will have to be separated. It's sad, but we cant' change their natural behavior," she said. "Tigers start eating meat when they are three months old."