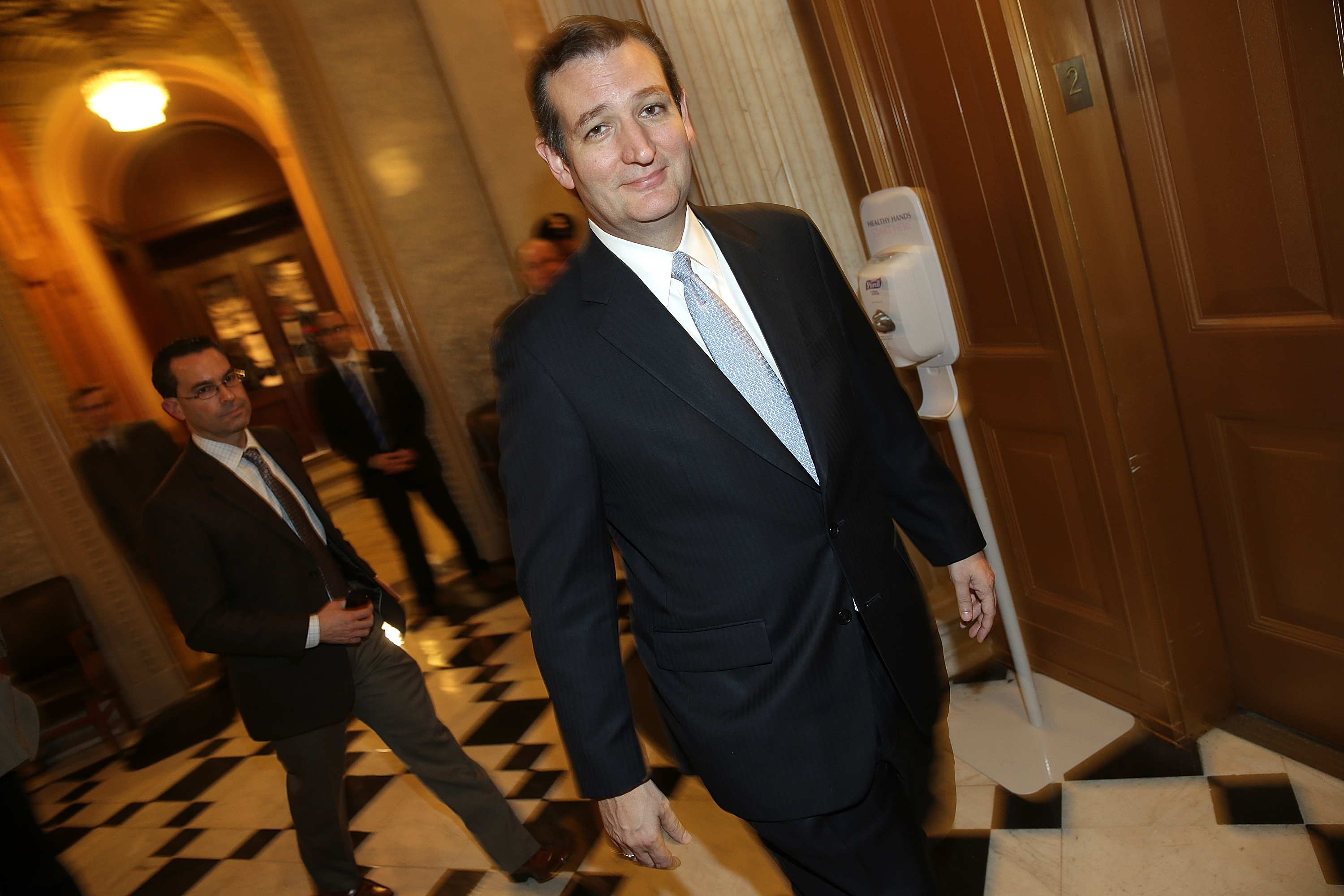 On Friday evening, the Senate's leaders, Mitch McConnell and and Harry Reid thought they had an agreement from their members to let the clock run over the weekend without actually being in session, and vote Monday on the $1.1 trillion spending bill needed to keep the government up and running. But Sens. Ted Cruz of Texas and Mike Lee of Utah objected to the spending bill. This meant their colleagues in the Senate would have to hold a rare Saturday session to keep the spending bill moving.

It also had the unintended benefit of helping the Democrats move forward with the nominations of 24 of the Obama administration's nominees for executive and judicial branch positions. Without the delay, the Senate could not have started voting on the nominees until Monday evening - and at that point, if lawmakers started leaving town for the holidays, Democrats would likely have been denied their last shot at confirming the president's nominees while they have a majority in the Senate.

Now, the Senate will begin voting to confirm the 24 individuals Monday morning. Here are four of the more controversial nominees who will now get a vote.

Vivek Murthy for Surgeon General: Murthy's nomination fell victim to congressional gridlock over a lightning-rod political issue: guns. Sen. Rand Paul, R-Kentucky, blocked his nomination in February, arguing Murthy's non-clinical experience working with an offshoot of a pro-Obama campaign group made him overly political for the job. As co-founder of Doctors for America, he slammed politicians in a tweet for "playing politics w/ guns, putting lives at risk b/c they're scared of NRA."

Some red-state Democrats who take pride in their record on gun control could also oppose the nomination, even though they lost their seats in the 2014 midterms. But Murthy only needs 50 votes for confirmation.

Sen. John McCain, R-Arizona, on the other hand, told reporters at the time of Blinken's confirmation hearing that he was "totally unqualified" for post, in part because he called Iraq "less violent, more democratic and more prosperous...and the United States more deeply engaged there than any time in recent history" in 2012, after U.S. troops had withdrawn from the country. Two years later the Islamic State of Iraq and Syria (ISIS) would seize control of parts of the country and throw it into turmoil. But McCain may find himself outvoted when Blinken gets a vote of the full Senate Monday.

Sarah Saldaña, for Immigration and Customs Enforcement (ICE) Director: Texas Sen. John Cornyn, a Republican, had plenty of nice things to say about Sarah Saldaña, a U.S. Attorney for the Northern District of Texas when he introduced her confirmation hearing for the ICE director position. But ultimately neither Cornyn - nor Cruz, nor any of the Republican senators - voted to advance her nomination to the full Senate because she said in her written testimony that she believed Mr. Obama had the authority to defer deportation for millions of immigrants in the U.S. illegally, a move he announced in November.

Even though she'll get a vote Monday, Saldaña could be in trouble: a procedural vote on her nomination got just 48 votes, shy of the 50 she would need for confirmation. However, six Democrats did not vote on the procedural motion and one opposed her.

The Senate was also set to vote on the nomination of Carolyn Colvin to become commissioner of the Social Security Administration, but the Associated Press reports that Democrats cancelled the vote even after she cleared a procedural hurdle on Saturday. Republican senators on the Senate Finance Committee raised concerns about an ongoing investigation at the agency, which paid $300 million for a computer system that still doesn't work. Colvin has been the acting commissioner for almost the past two years. The Republicans said the vote should not proceed "as long as the specter of a potential criminal investigation surrounds the nominee and/or those in their inner circle."

Ultimately, though, several Republicans sounded none too happy that Cruz and Lee's maneuver had resulted in extra time for Democrats to begin advancing the Obama nominees.

"The White House is going to end up with far more nominations confirmed than they ever would have," said Sen. Bob Corker, R-Tennessee, according to the Washington Post. Sen. Susan Collins, R-Maine, called Cruz and Lee's moves "unfortunate" and "counterproductive."

Sen. Orrin Hatch, R-Utah, quoted by the Associated Press, groused about Cruz, "You should have an end goal in sight if you're going to do these types of things and I don't see an end goal other than irritating a lot of people."

Sen. Chuck Schumer of New York, the number-three Senate Democrat, crowed that Cruz "aided and abetted us getting nominations," according to the Post.

And a spokesman for Senate Majority Leader Harry Reid, D-Nevada, was quick to point out that just 21 other Republicans supported Cruz's final attempt to block funding for the Department of Homeland Security (DHS), which carry out Obama's immigration policies. He and Lee wanted to see that funding cut off immediately.

Phil Novack, a Cruz spokesman, said in a statement Monday that "everyone knows Harry Reid planned to jam forward as many nominees as he could after the omnibus passed."

"He made this clear to members last week, and his spokesperson confirmed so publicly. Unfortunately, there are many on both sides of the aisle who would rather stoke stories about Ted Cruz to distract from the more important debate over the President's unilateral action to grant amnesty," Novack said.

This is surely not the last clash Cruz will have with his fellow Republicans in the Senate, who are frustrated that the president is getting more of his nominees in place than he otherwise might have. But the stark outcome of Cruz's vote was a victory for McConnell, one which he may have seen coming. Politico noted that when McConnell was asked "if he was frustrated with his conservative members on Saturday, he responded to a pair of reporters with a wink and a smile."

The Senate will have a chance to revisit this soon, since the spending bill passed by the House and Senate only funds DHS until February.