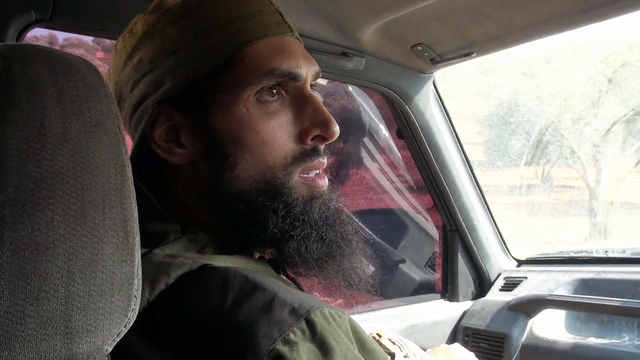 After months of negotiations, a 26 year old Dutch fighter called Yilmaz agreed to meet CBS News correspondent Clarissa Ward. Born in Holland, he is one of the thousands of jihadis fighting in Syria. He was a soldier with the Dutch army. Two years ago, without telling his family, he left Holland and traveled to northern Syria to fight with the rebels and work as a military trainer. He tells Ward why he did it.

The FBI posted a clip of an ISIS video on their website asking for help to identify the masked man speaking in an American accent. As CBS News National Security Correspondent David Martin reports, the FBI believes the masked man is from the northern border area of the U.S., or Canada. He is not the first ISIS fighter to be hunted by his voice.

A month ahead of the midterm elections, voters choose the economy (34 percent) as the most important issue that will decide their vote for Congress. Health care comes in second (17 percent), closely followed by terrorism (16 percent). Both Republicans and Democrats choose the economy as the top issue.

Crunching the Numbers: What if the swing voters aren't who you think? CBSNews.com continues its series taking you behind the scenes with the elite pollsters and number-crunchers shaping our politics and policy today. In a world that sometimes seems awash in data and statistics and endless arguments, our Elections Director, Anthony Salvanto, gets them out of the office, away from the computers, and tries to make sense of it all.

The Florida governor's race has developed into one of the most negative in the country. Both candidates in the important swing state are suffering sagging approval ratings after a recent barrage of negative ads. With the governor's mansion up for grabs in a state that's crucial in presidential politics, both candidates are seeing some high-profile support in the final weeks of their campaigns.

It was a cloudless Sunday in Arlington, Virginia, and little did the crowd of 1,600 standing inside Washington-Lee High School realize they were witnessing something of a political vanishing act. The date was Nov. 3, 2013, and as CBS News White House Correspondent Major Garrett reports, Mr. Obama hasn't been seen in public at a campaign rally since.

Former Defense Secretary Leon Panetta is making waves in Washington over his new memoir, "Worthy Fights." CBS This Morning Anchor Charlie Rose reports, Panetta criticizes the leadership of his former boss, President Obama, including his decision to limit America's military involvement in the Middle East after a decade of war.

Another scare overnight as a passenger gets sick on a flight out of Dallas. CBS News Correspondent Manuel Bojorquez reports that over 100 passengers were questioned and released. Meanwhile, the 19-year-old son of the Texas Ebola patient traveled from college to visit his father, but was not allowed to see him.

For health care workers, the Ebola virus presents a deadly threat -- beginning with first responders. The Centers for Disease Control and Prevention has issued a detailed checklist to hospitals specifying how to respond to potential Ebola infections. But, CBS News Correspondent John Blackstone reports, some health care workers say the measures aren't being put into effect quickly enough.

North Korea's supreme leader Kim Jong Un hasn't been seen in public for more than a month, and as CBS News Correspondent Seth Doane reports, the affairs of the so-called Hermit Kingdom aren't exactly transparent, so his suspicious absence is leading to rampant speculation.

Thanks to the ongoing drought in Brazil, the world's leading coffee producer and exporter, coffee prices and futures hit multi-year highs this week. Part of the problem is that the previously forecast rains, expected to bring relief to the coffee-growing regions in central Brazil, have failed to materialize. The lack of rain comes at a crucial time in the growing cycle for the nation's coffee crop.

Spain to kill dog of Madrid woman with Ebola

Cartels, corruption, and the case of 43 missing Mexican students

Pope and prelates get unexpected lecture on the joy of sex

Bill Clinton gets in on the "selfie" craze

Ello is coming, but Facebook has little to fear -- for now