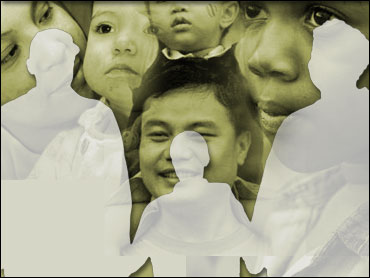 There are some things that most people have a difficult time understanding. Among them are Einstein's theory, the Electoral College and how a television show about Naval justice can stay on the air all these years even though you've never met anyone who's ever seen it.

But there's an even bigger and more confusing question that many of us grapple with: Is that person you see at Thanksgiving, weddings and funerals your second cousin or your first cousin once removed? This is difficult stuff. In fact, I wouldn't be surprised if Einstein had so much trouble with the whole cousin conundrum that he avoided it by burying himself in something easier like the time-space continuum.

My kids love their cousins and always have a great time with them. This has been a pleasant surprise to my wife and me, because sometimes they don't see their cousins for years. And even though some of their cousins are much older than my kids, there is a closeness that can only be explained by the fact that they are cousins.

The trouble begins in the car after the visit. "Dad, if Barry is Mom's first cousin, what is he to me?" "If I'm Joe's cousin, what is he to you?" Like most good parents, I've tried dealing with these questions by turning up the volume on the radio. It doesn't work. The questions persist, and they get more complex as the kids get older. "Who's a closer relative: my second cousin or my first cousin once removed?" At this point, you're likely to want to talk to the kids about something you feel more comfortable with -- like drugs or sex.

There's a good chance the next time your family gets together, people will be arguing about whether Harry is a first or a second cousin. Once you overhear people discussing things like "second cousin once removed," you could slip out the back door, walk around the block a few times, maybe go to Europe for a week or so, but when you walk back in the door, they'll still be arguing about the cousin thing.

Defining these relationships shouldn't be so hard. This is not a subjective matter like some people thinking it's cold in a room and some people thinking it's warm. There are absolute rules and definitions. The rules that govern who's related to whom and how are determined by something called, "consanguinity." (And you thought I was kidding about it being too much for Einstein. By the way, Einstein's second wife was his first cousin, after his first wife had been removed). The rules of consanguinity evolved to help determine how closely related people are so that an estate may be settled without argument. (Who are they kidding? I don't care how definite the rules are, people are still going to fight over that brooch and those old coins in the safe deposit box).

So, I'm going to lay these rules out for you. After reading this, nobody should ever be confused about this issue again:

If the above explanation is still more than you want to deal with, you can use the method that I've used with my wife for years. I disregard all the second, third, and "removed" stuff. If somebody is nice and fun to be with, they are "our cousins." If they are unpleasant or annoying, they are "her cousins." It's much easier this way.