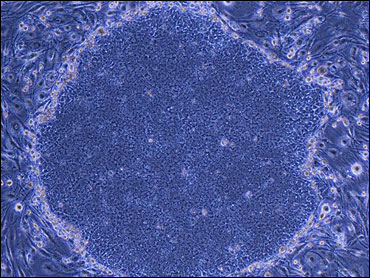 When scientists first created induced pluripotent stem cells (iPS cells) three years ago, they were hailed as a game-changing advance for medicine: Scientists hoped the engineered cells could duplicate the talents of embryonic stem cells, which can develop into any kind of cell in the body, while avoiding the destruction of embryos. However, a new study by one of the leading U.S. cell labs suggests that iPS cells, at least right now, have serious problems keeping them from reaching their potential.

But the blood and retinal cells showed much higher rates of cell death and premature aging. According to Lanza, there was a 1,000- to 5,000-fold difference" between the iPS cells' ability to keep growing and dividing and the true embryonic cells' ability, he says. "In terms of whether you can use the cells therapeutically or to study disease, that's the difference between getting the study to work and being dead in the water"

So what's the problem? Lanza suspects that it comes from the use of viruses to insert genes into cells and make them revert to that pluripotent state. But, Newsweek reports, there are other ways to create iPS that show promise for creating healthier cells. Biologist Maria Blasco says that perhaps telomeres are the issue: These lengths of genetic material that protect genes from damage each time they reproduce may be shortened in induced cells. "If telomere length is not fully reprogrammed to that of embryonic stem cells during induced cell generation, this could be certainly a possible explanation for the difference.

Whatever is happening, it's a major setback for iPS research. Lanza's team had wanted to apply to use iPS cells in clinical trials, but now, he says, that's not going to happen. While scientists had already tried to test drugs on iPS cells, this level of cell death and early aging means that researchers can't know for sure whether effects they see in experiments come from problems with the drugs or the cells. And it means that fights over embryonic stem cells could intensify once more. Says Lanza,"it would be premature to abandon research using embryonic stem cells until we fully understand what's causing these problems"