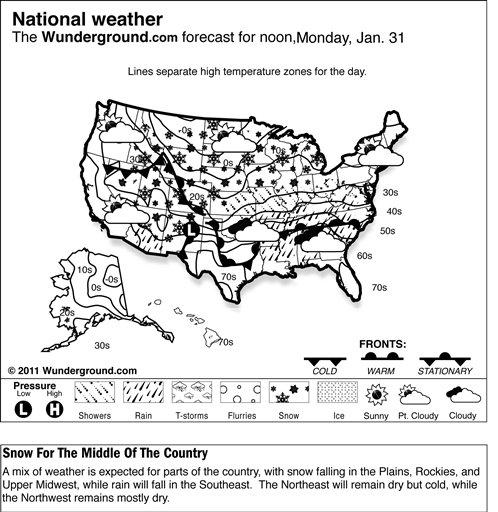 An arctic airmass will continue gripping the Central U.S. Monday as strong high pressure settles over the region.

Cold weather will reach southward into the Southern Plains with below normal temperatures. Daytime highs in Texas are expected to drop into the 20s. Clear nighttime skies will cause more cooling and lead to nighttime temperatures in the single digits. Meanwhile, in the north, steady north winds will result in dangerously cold wind chills in the Northern Plains during the early morning. In addition to cold conditions, a slow moving storm will produce more light to moderate snow through the afternoon. Wintry precipitation will finally begin tapering off from north to south Tuesday leaving behind snow accumulations of about 8 to 10 inches in east central South Dakota and southwestern Minnesota and lighter accumulations elsewhere.

Meanwhile, to the south, a frontal boundary will linger from Texas through the Mid-Atlantic coast. The disturbance will tap into moisture from the Gulf of Mexico and the Pacific to produce numerous bands of rain and thunderstorms from central and southeastern Texas through the Southeast and the nearby coastal waters. There's a slight chance for severe weather activity with hail and damaging wind.

Finally, the storm moving through the West will drop 3 to 6 inches of snow in the Central and Southern Rockies. Heavier snow accumulations are expected in the higher elevations, while rain showers and thunderstorms develop in the lower elevations of Arizona and New Mexico.

Temperatures in the Lower 48 states Sunday have ranged from a morning low of -16 degrees at Hallock, Minn., to a high of 84 degrees at Laredo, Texas.