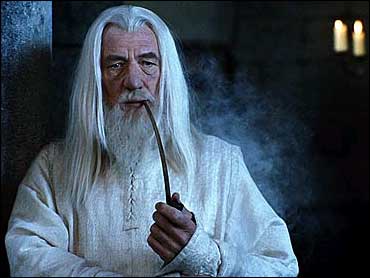 "The Return of the King," the third movie in the "Lord of the Rings" trilogy, continued to dominate the box office for a third straight week. Because no new movies opened in wide release for the New Year's weekend, this week's box office numbers look a lot like those of the previous week.

The biggest surprise with the "Rings" series, says Laurie Hibberd, entertainment contributor for The Early Show, is that it didn't disappoint anybody.

"Other franchises - "Matrix" - people were ramped up for and
were disappointed. "The Return of the King" has just completely blown everybody away and rounds out the trilogy nicely. It did so well in a year where we saw a lot of moviegoers not want to see sequels."

Hibberd notes that many people were skeptical before the first of the series was released.

"Think back to when they first hired Peter Jackson to direct this film. A lot of people outside of England didn't know him. They shot all three at once. It was a big gamble. At that time, Hollywood was holding its breath. It's made them huge. They look like geniuses now."

Man whose car plunged off cliff found by family

A lot of the credit, Hibberd says, is due to the director, Peter Jackson. "He had a vision that nobody could have believed was possible," she said. His next project is a "King Kong" movie "he's doing it with the people who wrote the adaptation of "The Lord of the Rings," his life partner and another friend.

The trilogy has made a staggering sum, $2.3 billion and still growing.

The overall box office was up about 14 percent compared to the same weekend last year, when "The Two Towers," the second installment of "The Lord of the Rings," was No. 1, followed by "Catch Me If You Can" and "Two Weeks Notice."

Total ticket sales came in slightly lower for 2003 than the year before, the first downturn since 1991. "It's a little early to start celebrating," Dergarabedian said of 2004's first week. "But you want to head into '04 with momentum."

Estimated ticket sales for Friday through Sunday at North American theaters, according to Hollywood.com, are: