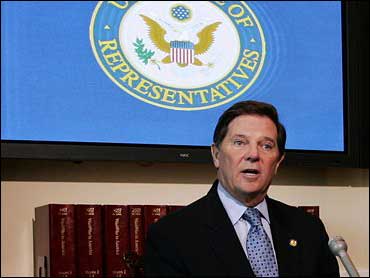 Dotty Lynch is the senior political editor for CBS News. E-mail your questions and comments to Political Points


Just when the hot seat had shifted from Tom DeLay to Mike Brown and Bill Frist, a Texas grand jury indicted DeLay on a count of criminal conspiracy for laundering money in the 2002 election. DeLay and his allies yelled that Texas D.A. Ronnie Earle was a Democrat on a political vendetta. DeLay's lawyers called the indictment "skunky."

But the foreman of the grand jury saw it differently. William Gibson, a 76-year-old retired sheriff's deputy from Austin, told the AP that Earle didn't pressure members one way or the other. "Ronnie Earle didn't indict him. The grand jury indicted him. He's probably doing a good job. I don't have anything against him. Just something happened."

Democrats were jubilant. House Democratic leader Nancy Pelosi called the indictment, "the latest example that Republicans in Congress are plagued by a culture of corruption at the expense of the American people." And House Democrats sent out a fundraising e-mail two hours after the indictment was handed down declaring the end of the Republican Revolution. "The poetic justice of DeLay being indicted on the very anniversary of the self-righteous Contract with America will go down in history as one of the most spectacular falls in American politics, and the closing chapter in the so-called "Republican Revolution," wrote DCCC executive director John Lapp.

Republicans scrambled to deal with the situation in a meeting that DeLay described as a touching display of unity. Except that in the hours preceding the meeting, a struggle over who would take his place was not all that warm and fuzzy. Eventually, Speaker Dennis Hastert moved up Rep. Roy Blunt, now the number three person in the House leadership, to assume the role of "temporary majority leader."

Others, including DeLay, were pushing for a placeholder, specifically California Rep. David Dreier, the well-liked chairman of the House Rules Committee, who wouldn't get too comfortable in the office. There is some jockeying for the job as the next speaker among Blunt, Rep. John Boehner and Rep. Tom Reynolds and putting Drier in the slot would have avoided playing favorites. But Blunt and his conservative allies blocked that move. He got the title and most of the responsibility. Dreier and deputy whip Eric Cantor will take over some of increased workload with Dreier remaining as Rules chair and designated to "handle the duties of the majority leader as it pertains to coordinating with the committee chairmen."

To say that Republicans are going through a "rough patch" is an understatement. The president's poll ratings are at record lows for his handling of the war with Iraq and the aftermath of Katrina. His pet project of Social Security reform is doomed, there are financial investigations of both Frist and DeLay, and the members and the GOP rank and file are divided over the role of the federal government and government spending.

But there are a few Republicans seeing a ray of light in all this. Although DeLay expects to be acquitted and come back to the leadership, and his colleagues gave him kind words on Wednesday, some Republicans are breathing a sigh of relief. They believe that Blunt and the new team can put things back on track without the distraction of DeLay's legal and ethical controversies. DeLay has been a huge albatross for Republicans for months, if not years, and getting him on the sidelines and out of the leadership could be a big help toward rebuilding the party.

But for now, that ray of light is somewhat dim and DeLay is gearing up to fight not just Ronnie Earle but any attempt to move him aside permanently.