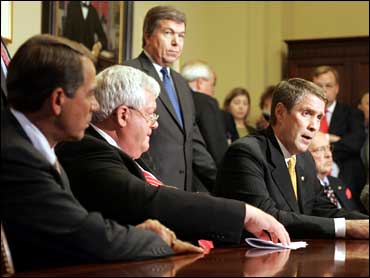 Mark Foley's sexuality was never much of a secret to those who served with him in the House.

The New York Times and every major newspaper in Florida had been writing articles on the congressman's agonizingly inept attempts to remain closeted for years. Indeed, it was the embarrassing manner in which he had attempted to cloak his sexuality that prevented Foley from securing his party's nomination for the U.S. Senate in 2004 and again this year.

Tragically, as a Florida Republican, Foley felt that if he wanted to remain a political player, he needed to live a lie. He was probably wrong; Republicans who have come out of the closet, such as retiring Arizona Congressman Jim Kolbe, have often thrived politically. Openly gay men and lesbians have been elected and reelected to the House as Democrats and Republicans, and Foley — whose relatively moderate voting record could have appealed to both Main Street Republicans and Democrats — might well have broken the barrier in the Senate.

But Foley didn't trust Florida Republican voters to accept him for who he was, so this otherwise personable and capable congressman engaged in an increasingly challenging and ultimately unsuccessful attempt to hide a huge part of his identity.

The pressures imposed by such secrecy appear to have been too much for Foley. Unlike the vast majority of homosexuals — who, as a group, are less likely to be attracted to children than heterosexuals — the congressman began to engage in activities that were inappropriate and potentially illegal. Details that have surfaced in recent day suggests that Foley had made a mess of his life — a mess that exploded on him and his party when it was revealed that the co-chair of the Congressional Caucus for Missing & Exploited Children had sent "Do I make you a little horny?" e-mails to teenage boys.

Foley's Republican colleagues, who are champions when it comes to shooting the wounded, immediately began trashing him. "This type of behavior is what I try to protect my grandchildren from," snarled Clay Shaw, the GOP representative from a neighboring Florida House district. House Speaker Dennis Hastert, R-Illinois, Mouse Majority Leader John Boehner, R-Ohio, and House Majority Whip Roy Blunt, R-Missouri, issued a statement condemning Foley's behavior as "an obscene breach of trust."

"His immediate resignation must now be followed by the full weight of the criminal justice system," Hastert, Boehner and Blunt said of Foley.

Fair enough. But what do these Republican leaders think about those who knew about Foley's undue interest in male pages, covered the fact up for months — perhaps years — and then lied about what they knew. Should they, too, face "the full weight of the criminal justice system?"

When the news of Foley's e-mails broke in the media, Hastert declared, "I was surprised."

Congressman Tom Reynolds, who chairs the Republican Congressional Campaign Committee, revealed on Saturday that he had informed Hastert months ago about concerns regarding Foley's habit of sending sexually suggestive — "strip down and get naked" — e-mails and instant messages to male congressional pages.

Congressman Rodney Alexander, the Louisiana Republican who brought those concerns to the attention of party leaders after learning about Foley's e-mails from the family of a former page in 2005, has confirmed that his office contacted Hastert's office regarding the matter. Additionally, Alexander personally discussed the issue with Reynolds and Boehner.

Another Republican with close ties to the House leadership, Illinois Representative John Shimkus, admits that he investigated the e-mail issue in 2005 — apparently after it was reviewed by Hastert's office and the office of the Clerk of the House — and says he warned Foley to break off contact with a particular teenager and, in a more general sense, to stop stalking male pages. Then, Shimkus dropped the matter — to the apparent satisfaction of Hastert, Boehner, Blunt, Reynolds and other House Republican leaders.

Some readers may be surprised that these top Republicans, who go on and on about the need to fend off supposed "threats" posed by loving and responsible gay and lesbian couples, would be so accepting of Foley. The truth is that the hands-off approach to this whole scandal is entirely in character for the current crop of Republican leaders, who could care less about the sexuality of members of their caucus.

They only employ "moral values" appeals to scare up votes at election time; it's never been something they believed in.

Hastert and his compatriots care only about winning elections and keeping power — even when that involves looking the other way after concerns have been raised about what a good many Americans see as the stalking of children.

Dennis Hastert and the other Republican leaders certainly were not surprised to learn last week that Mark Foley had acted inappropriately with male pages. They knew all about Foley's e-mails and all the issues raised by those communications.

Hastert and his colleagues have gotten caught in a lie. And it's a big one.

What's the proper response? Hastert, Boehner and Blunt have got the right idea. Those who knew about Foley's actions and failed to respond in any kind of serious manner are guilty of "an obscene breach of trust."

Since they control the machinery of the House Ethics Committee, it is doubtful that Hastert and his colleagues will face a serious investigation — let alone "the full weight of the criminal justice system." But this is an election year, and political campaigns can also extract a measure of justice.

Hastert and Boehner are scheduled to attend fund-raising events on behalf of embattled Pennsylvania Republican Congressman Don Sherwood in coming weeks. Sherwood's Democratic challenger, Chris Carney, a Lieutenant Commander in the United States Navy Reserve who served as a senior adviser on intelligence and counterterrorism issues at the Pentagon, has asked the Republican congressman to cancel the events. "Holding happy hour fundraisers with people who cover up the cyber-molestation of children should be below even the questionable morals of Don Sherwood," explained Carney campaign manager Andrew Eldredge-Martin. "Sherwood should immediately cancel his upcoming fundraisers with Hastert and Boehner. Don Sherwood has already brought Washington's values back to the district, now he wants to bring a depraved cover-up home."

Ouch! There's a new twist on the old Republican appeal to values voters that Hastert wasn't counting on.