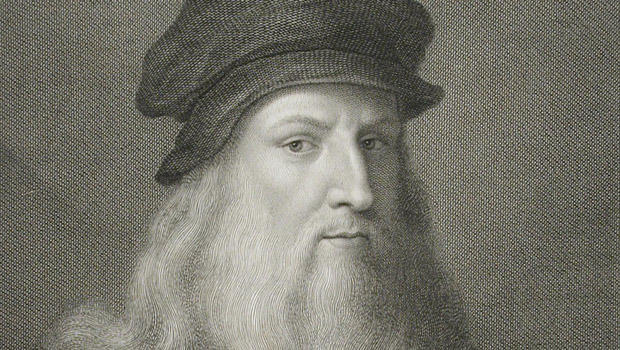 The painting "Salvator Mundi" by Leonardo da Vinci could fetch $100 million or so at auction next month -- just one small part of Leonardo's rich legacy. Our Cover Story is reported by Dr. Jon La Pook:

They pack the gallery at the Louvre in Paris -- at least six million people a year -- for a glimpse at a superstar. But a select few, like author Walter Isaacson, actually appreciate the "Mona Lisa" as art.

"It's the most famous painting in the world," he said. "And when you stand before it at the Louvre, you all of a sudden realize why. It's the most emotional painting."

She's been a celebrity for 500 years. But we know a lot more about the celebrity artist who painted her than we do about Mona Lisa herself.

Largely because her creator, Leonardo da Vinci, documented his life's work in painstaking detail: some 7,200 pages of scribbles and sketches survive.

"You know, Leonardo may have been the person with the greatest amount of curiosity of any human who ever existed," Isaacson said. "And he would make lists in his notebooks of things he wanted to know. Like, how do they walk on ice in Holland? Or, describe the tongue of the woodpecker. Now, who in the world would wake up one morning and put on their to-do list 'describe the tongue of the woodpecker'? But there it is.

"And over and over again, Leonardo is just putting down in his notebook things he's curious about."

Isaacson's own curiosity has given us bestselling books about Albert Einstein and Apple's Steve Jobs. And his just-released biography of Leonardo da Vinci (published by CBS' Simon & Schuster) will also be a film, starring another Leonardo.

"There's a story that Leonardo DiCaprio's told, which is that when his mother was pregnant with him, she was at the Uffizi," Isaacson told LaPook. "There's a wonderful Annunciation there. Looking at the painting, he starts kicking, and the dad said, 'We're gonna name him Leonardo.'"

DiCaprio's namesake was born out of wedlock in Florence in 1452. With little formal schooling, he was apprenticed at age 14 to an engineer and artist, and Leonardo's skill and imagination flourished.

"Florence was very tolerant of a guy like Leonardo, who was left-handed and gay and vegetarian and illegitimate," Isaacson said.

And, it seems, quite a hunk. "Leonardo was also incredibly good-looking, in very good shape, extraordinarily athletic, long, curling hair. I think that 'Vitruvian Man' -- the guy in the circle and the square spread eagle -- I think it's partly a self-portrait."

But perhaps most of all, Leonardo was stunningly inventive. For instance, he created a portable bridge, "which you can just pop up in the middle of a battle if you have to cross a river."

The Aspen Institute, the nonprofit think tank Isaacson helped to shape for many years, recently held a celebration of all things Leonardo on its Colorado campus.

Sketches were transformed into three-dimensional models, like his famous helicopter ("I think it was first designed for the theater, 'cause he was doing all these amazing props, having people fly in and descend and ascend on the stage"), and an underwater diving apparatus ("He said it would be a great way to sort of attack ships. In fact, he kept secret some of the details for fear that the enemies could figure it out").

But it's Leonardo's sketches that may set him apart.

Now so valuable that when curators at New York's Metropolitan Museum agreed to give us a peek, at first they would only show us copies, until we promised to limit exposure to our television lights.

"You know, when I saw these for the first time, it's like, oh my goodness, there's the hand of the artist," Isaacson said. "It's just as if he were making it in front of me. Every time you see it, there's a new layer to appreciate."

Of Leonardo's drawing of the head of a virgin, Isaacson said, "Something's happening here. Something's caught her eye. She has turned her head. It's a study for many paintings he would do later. But you realize that he didn't just love objects; he understands how human movements reflect the emotions of the mind."

Only one Leonardo painting is in the collection of an American museum: a portrait of Ginevra de' Benci at the National Gallery of Art in Washington.

Dr. LaPook asked, "How did it help change Renaissance painting?"

"Up until then, Renaissance painting had had sort of sharp lines," Isaacson said. "And Leonardo said, 'That's not the way nature works.' So there's a smokiness to the lines.

"But the great thing about this picture is, you see a young Leonardo who's on a path to painting the Mona Lisa. But this isn't the Mona Lisa."

There's something else uniquely da Vinci about this portrait: "Leonardo cared even about the parts unseen. So he paints the back of Ginevra de' Benci. And we realize he still has more to teach us."

Leonardo even taught himself anatomy with dozens of human dissections. He documented how the aortic valve in the heart works -- something researchers only confirmed in recent years.

And then there's his knowledge of the eye. "He realized that the center, when you're staring at something, you see the detail. And if you're slightly off, it goes to a different part of the retina. The harder you look directly at the Mona Lisa's lips, the more it looks like her lips are turned down. But as your eyes wander, she starts smiling at you. So it flickers."

"Did Leonardo da Vinci figure out a way to have a painting flirt with the viewer?" LaPook asked.

"Yes, he figured out a way to have it interact. In the Mona Lisa you see the combination of all of Leonardo's anatomy and science with his art."

And what better place to discuss Leonardo's genius -- and his "Last Supper" -- than over an Italian meal? Emotion, spirituality and drama make this fresco one of the world's most admired works of art, studied down to the tiniest detail -- which is how we found out what may be the origin of one of our most familiar superstitions. "It is certainly one of the greatest Biblical moments ever, which is Judas knocking over the salt in that painting," Isaacson said.

The artist, engineer and scientist who lived a life of boundless curiosity died in 1519. He was 67, and left no known children.

Leonardo da Vinci died a poor man. But, says Walter Isaacson, he left us a wealth of lessons.

When asked if he has found himself looking at the world differently, the da Vinci biographer replied, "I walked over here to the Metropolitan Museum through Central Park, and I took a little bit of extra time, because he loved the way light hit leaves and formed shadows. He's somebody who says: pause for a moment and look at the way the water is falling into the pond. Those are the type of things he noticed. And I try to push myself to notice things that Leonardo would've noticed."