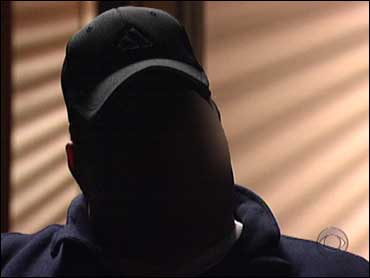 Only one other undercover agent in history has walked in his shoes; played a role to such perfection as to be offered the Mafia's most sacred blessing.

"I am the second law-enforcement officer ever to be proposed for membership into La Cosa Nostra," Jack Garcia told CBS News chief investigative correspondent Armen Keteyian.

The first, immortalized in the movie "Donnie Brasco," tells the tale of FBI agent Joe Pistone who infiltrated the Bonnano crime family back in the mid-1970s.

Now, for the first time on television, a modern-day Brasco, who still works undercover, tells CBS News how he convinced the notorious Gambino crime family he was one of their own.

"You're always so afraid for your life," Garcia said. "And anyone who tells you otherwise is lying. I mean, things can turn like this (snaps fingers)."

His riveting story begins as Garcia, a Cuban-born immigrant turned FBI undercover agent with a gift for creating characters - from a drug lord to small-time mobsters - for 20 years.

Then he went big-game hunting after the Gambinos, posing as Jack Falcone, a Miami wise-guy.

"Jack Falcone was a knock-around guy from Florida who was a jewel thief, he was a hijacker. He was an individual that was surrounded in Miami by the Cuban culture," Garcia said.

It was the spring of 2003 when Jack Falcone, a.k.a., "Jackie Boy," caught the eye of Gambino capo Greg DePalma who controlled loan sharking, gambling and construction rackets in and around New York.

"They wanted me because I was an earner," he said. "You're not a broken-down garbage can. You're a guy who makes money, and that's what the mob is all about."

Falcone eventually earned DePalma's trust by offering an endless supply of stolen goods - likes cigarettes and televisions - all provided by the FBI.

"Jack, there has to be a moment when the door opens and you realize I am in," Keteyian asked.

"I remember that day distinctively," Garcia said. "I met with him, at which time he presented me with a beautiful diamond pinky ring. He told me he put me on record with the Gambino crime family. 'You're under our umbrella.'"

Wearing a court-authorized wire, over the next two years Falcone secretly recorded DePalma - and other bosses - concocting money-making schemes at restaurants, diners, even a Jewish geriatric center … the FBI monitoring almost every meeting.

In a scene straight out of Hollywood, at one point Falcone was called upon to "talk" to a made man not paying the proper respect to DePalma. It was a meeting that took place right in one Bloomingdales' housewares section.

Things turned ugly. Falcone says he watched a mob soldier pick up a solid glass candlestick and bash the guy over the head.

"In the housewares," Garcia said. "Grabs it, hits him right over the head, cracks his head open. You hear like a melon popping; blood all over the place."

In March of 2005, the FBI swooped in and arrested DePalma, his bosses Arnold Squitieri and Anthony "The Genius" Magale along with dozens of underlings, essentially decapitating the family.

All pleaded guilty except DePalma, who insisted on going to trial, where, before his eyes, his "Jackie Boy" turned into FBI agent Jack Garcia…putting DePalma behind bars for 12 years.

Describe the look on DePalma's face, as he's staring at you when you are on that witness stand.

"It was like, if he could only get his hands around my neck," Garcia said.

Is he worried Greg DePalma wants to put him in the ground?

"What the bureau did, they went out and spoke to the heads of all five families and they told them if anything is to happen to Jack Falcone, the reign of terror will fall upon them," Garcia said.

But what motivated Garcia to put these guys away?

"I saw the faces. They're really like wolves in sheep's clothing," he said. "These are not the people that should be revered… as being these great group of guys. They're not. They're criminals."