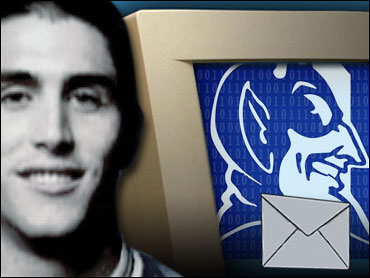 Duke University is now at the eye of a Perfect Storm.

So many distinct winds of social antagonism are colliding so viciously and with such clear definition that it's almost hard to believe that the whole situation is real and not contrived for fiction.

To say the story is real is not to say that the truth is known.

We do know that a black woman alleges she went to a party of men, Duke lacrosse players, at 610 N. Buchanan Blvd. in Durham, N.C., late on March 13 to do strip dances with another woman, and then was forcibly raped and sodomized by three white men in the bathroom and also assaulted with racial insults. We do not know if those allegations are true.

False accusations are an ugly part of modern America. The players have denied the charges. If these are false accusations, many people will have needlessly suffered.

If they are ultimately shown to be true, the victim will deserve every possible ounce of justice. Some people will go to jail, many lives will be scarred and many people, institutions and social attitudes will rightly get shares of blame.

We do know that the social fissures erupting in Durham have water coolers and blogs agog all over. The collisions are epic: black and white, town and gown, rich and poor, privilege and plain, jocks and scholars.

We do know that some people believe boys will be boys; that a stripper at a party of lacrosse players is asking for trouble, that rich Duke kids are ripe targets for false accusations — victims of a culture of political correctness that has criminalized behavior that used to be just fine on campus.

On his radio show, for example, Rush Limbaugh joked that Al Sharpton is "trying to figure out how he can get involved in the deal down there at Duke where the lacrosse team, uh, supposedly, you know, raped some 'ho's'" He apologized later for his word choice.

We do know that there is a wide community eager to believe the worst about the 47 members of the Duke lacrosse team, convinced not just that three of them raped and degraded a black woman, but that their teammates are specifically covering up for them and that the whole Duke community — an irresponsible coach, a purposefully blind university administration, a complacent police force, a culture of permitting pig-boys to be pig-boys — bears some general moral responsibility.

We know that the whole ugly episode took a mega-turn to the hideous and scary this week when the court unsealed an e-mail written a few hours after the party by team member Ryan McFadyen (this is the exact text except my dashes in expletives): "tommrow night, after tonights show ive decided to have some strippers over to edens2c [his dorm]. all are welcome.. however there will be no nudity I plan on killing the b- - ches as the[y] walk in and proceeding to cut their skin off while c----ing in my duke issue spandex."

That e-mail is something of a tipping point for those inclined to see the Duke lacrosse team as Animal House martyrs. It is disturbingly violent and perverted.

We know that the lacrosse team at Duke has been notorious and complained about for years. Just since September, the police were called to 610 Buchanan — the party house where three team captains lived — four times. Fifteen of the players, according to Durham County records, had police charges against them for things like underage possession of beer, having beer in a car, noise violation or public urination. Most got "deferred prosecution" deals whereby the charges would be dropped if they stayed out of trouble.

We know some facts about the case. We know there was a party and that two black strippers were there. We know that a neighbor, Jason Bissey, saw at least 30 men go into the house, followed later by two women. He saw the women come out later, and heard racial insults from at least one man. He wishes he had called the police then.

At 12:53 a.m. on March 14, police got a 911 call from a women saying white men were shouting racial slurs at her and a friend. Police came by, looked around and left. At 1:22 a.m., a security guard at a near Kroger market called 911 about a distraught woman at the store. That led police to the alleged victim. She was taken that night to Duke University Hospital. A search warrant said the "victim had signs, symptoms and injuries consistent with being raped and sexually assaulted vaginally and anally."

The house at 610 Buchanan wasn't searched for two days after that. Police took away objects including five broken fingernails, a bath rug and mat, a hand towel, a bottle of KY jelly, cell phones, cameras and computers.

But we know nothing of guilt and innocence.

We don't know what would have happened if the alleged victim had been white. Or if the alleged rapists were black football players. Or if this had happened at the University of Oklahoma. Or if lacrosse players weren't the stereotypical privileged white bad boys.

And we really don't know anything about the role played by a community and culture that was clearly tolerant and even protective of extreme jock boorishness and boozing for a long time. In an astounding irony, the story of that culture was written last year by Tom Wolfe in "I Am Charlotte Simmons," the cartoonish but dead-on novel of campus decadence set at a fictional Duke. The lacrosse players were the biggest cretins.

But pop culture, from pimp rap to beer ads to movies like "American Pie" doesn't just tolerate woman-hating, loutish, drunken and angry boy-behavior — it glorifies it. Many people complain that much boy-behavior-like heavy campus drinking that was absolutely normal 20 and 30 years ago has been "criminalized." I see a culture much more tolerant of misogyny, sexism and racism.

But there isn't any truth about what happened at Duke, yet. The storm is still blowing too hard. But like Hurricane Katrina, this storm has exposed some ugly realities. It will probably blow away without much good coming from it.

Dick Meyer, is the Editorial Director of CBSNews.com.