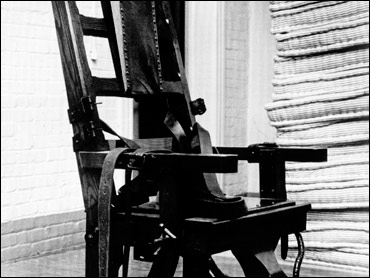 This column was written by Benjamin Wittes.

These are heady days for anti-death penalty activists. New Jersey has taken the plunge and legislatively repealed capital punishment - becoming the first state in the modern era to do so. Today, the Court will hear arguments over whether the specific drug cocktail used in lethal injections constitutes cruel and unusual punishment by causing too much pain to the condemned. By taking up the issue, the Court has effectively frozen all executions in the nation. And no state other than Texas (a significant exception) executed more than three people last year. The news has the anti-capital punishment Death Penalty Information Center (DPIC) proclaiming the "execution chambers silent" as the Garden State charts a "new direction" and declaring both actions symbolic of the "broad changes that have been occurring in the death penalty around the country."

Curb your enthusiasm. The death penalty is, like the Iraqi insurgency, not quite yet in its death throes. While capital punishment appears on the wane right now, neither New Jersey's action nor the temporary national freeze - particularly the latter - may mean all that much in the long run.

Don't get me wrong. Foes of the death penalty have good reason for cheer right now. In 1999, 98 people met their ends in execution chambers across the country, the culmination of a long revitalization of capital punishment following the Supreme Court's reinstatement of its lawfulness in 1976. Then, just as executions seemed to have become a routine part of our criminal justice system again, the numbers began a precipitous drop - to 85 executions in 2000, 59 in 2004, and 53 in 2006. In 2007, according to DPIC's data, that number dropped even further. The 42 people put to death in 2007 represent the lowest figure in 13 years and a drop of fully 57 percent since capital punishment's peak.

The de facto moratorium created by the Supreme Court case is a significant contributor to 2007's sharp drop. But after the court either strikes down the current mixture or okays it, executions will resume - perhaps using a different combination of drugs - and clearing the backlog will probably immediately lead to a brief spike.

Still, the downward trend is both broader and older than the current flap over the drugs. The annual number of people sentenced to death row has fallen since its peak in 2002. In 2007, according to DPIC, saw a historic low in new death sentences. And capital punishment, which has always been a regional phenomenon, has been growing ever more so. In 2002, for example, 65 percent of executions took place in only three states; the following year, the top three states accounted for 69 percent. In 2007, by contrast, Texas alone accounted for 62 percent of executions; the top three states accounted for 76 percent; and the top six states accounted for 90 percent. Meanwhile, not only did New Jersey dispense with its death penalty, but several other states actively considered abolition as well.

Something has clearly changed. The trouble for capital punishment opponents is that it's a lot less clear what's driving that change - or how to translate that force into abolition in the 36 states that retain execution as a criminal justice option.

Because one thing that's clearly not driving the shift is public opinion. Polls vary, but most show between 65 percent and 70 percent support for capital punishment, somewhat lower than during the peak period of its popularity during the 1990s but still strong and stable. While most Americans say they believe innocent people have been executed and that the death penalty does not act as deterrent, that doesn't seem to dampen their enthusiasm for it. In an ABC News/Washington Post poll, respondents preferred death to life in prison without parole for persons convicted of murder by about the same margins as they did in 2000. And in Gallup polling, many more Americans say they believe the death penalty is used "not enough" (51 percent) than "too often" (21 percent). Even in New Jersey, where legislators voted to ban capital punishment, voters disagree: A recent Quinnipiac poll found that Garden State residents oppose eliminating the death penalty by 53 percent to 39 percent.

Nor are the courts chiefly behind the change. Yes, in recent years, the Supreme Court has shifted gears on the death penalty and gone from enabling it to pecking away at it. It has banned executions of mentally retarded offenders and those who committed their crimes while juveniles. It has overturned convictions in cases plagued by particularly unfair trials, when for example prosecutors grossly manipulated the racial composition of a jury. It has opened the door a little wider to innocence claims. And the justices may well insist this term that states make executions a little more comfortable for the condemned. But all of this lies at the death penalty's margins. The high court is not about to stop states that wish to conduct executions, and its doctrinal maneuvering does not remotely account for the nearly 60 percent drop in executions the country has seen.

So what does? Unfortunately for opponents of capital punishment, the most significant factor seems to be no kind of public reevaluation of the policy but simply the declining prevalence of murder. The murder rate in the United States dropped by about 40 percent between its peak in the early 1990s and the turn of the millennium and has remained more or less flat since. The absolute number of murders has come down significantly too, from nearly 25,000 in 1991 to barely 17,000 last year, according to FBI statistics.

This shift has had two effects. The more direct one is simply to reduce the number of death-eligible crimes and, therefore, prosecutions. More diffusely, reducing crime means reducing public fear of crime, which in turn erodes the momentum behind capital punishment. While the change has not dramatically altered its political support, it seems to give everyone a little more pause in its implementation. Prosecutors may feel less pressure to push for death, judges less pressure to affirm a conviction or sentence. Jurors may hear defense arguments against death with a more open mind. Governors may contemplate clemency a little more freely. All of this has probably been compounded by the slew of cases in which states have freed innocent people from death row or from lengthy prison terms based on DNA evidence. Whereas ten years ago, America had a large volume of cases and was erring on the side of the death penalty, today it has a smaller volume, about which participants at every stage seem to feel more anxiety.

But the murder rate will not stay down forever. And if we are seeing not the beginning of the end but a kind of lull - a period in which the solid majority in favor of capital punishment does not care enough about it to keep it vibrant - the only hope for death penalty opponents is to use this period to lock in systemic reforms that will inhibit its rebound when the tide turns. If that's the goal, they're going to have to do better than abolition in New Jersey, a state that had capital punishment on its books but never actually used it. Unless they can generate similar legislative gains elsewhere - and there have been some but not enough - the decline will prove ephemeral and the New Jersey victory, not to mention the current national pause, will seem hollow indeed.
By Benjamin Wittes
If you like this article, go to www.tnr.com, which breaks down today's top stories and offers nearly 100 years of news, opinion, and criticism