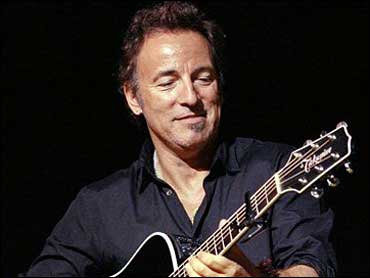 This commentary was written by MarketWatch media columnist Jon Friedman.

I have a confession to make.

I say this apprehensively because I know it could sound sacrilegious, if not downright un-American: I'm sick of Bruce Springsteen, who is appearing Sunday evening at the Super Bowl.

He'll be masterfully taking advantage of the utterly American institution to help sell copies of "Working on a Dream," his 15th studio album. It arrived in music stores on Jan. 27, featuring his long-time collaborators, the fabled E Street Band.

It looks to me that Springsteen was Born to Sell.

Yes, I agree Springsteen is shrewd to perform in front of a television audience of millions of Americans. These are tough times in the topsy-turvy music industry, and it makes business sense for Bruce to thrill his core audience of baby boomers and try to tap new fans.

Is it just a coincidence that tickets for many of Springsteen's upcoming shows go on sale Feb. 2, the morning after the Super Bowl?

What especially irritates me is that he and his management are so intent on presenting Springsteen as an American institution, someone who is obviously so sage and venerable that he belongs on Mount Rushmore -- right alongside Tom Hanks, as a matter of fact. Somehow, Hanks has also become bigger than life in American culture.

Likewise, we had Springsteen's recent appearance as the lead act in the concert to celebrate the inauguration of President Barack Obama. That was as much a television show as it was anything else, and it reached a sizable (albeit cable) audience watching at home on Time Warner Inc.'s HBO channel.

On that Sunday afternoon, Springsteen sang "The Rising," his 2002 patriotic anthem to a post-9/11 America. I thought that Bruce-the-opportunistic-huckster shamelessly used that song to capitalize on America's grief.

It appears that some people have held this view of Springsteen for many years. Back in 1985, the brilliant culture critic James Wolcott wrote in Vanity Fair about Springsteen: "Piety has begun to collect around Springsteen's curly head like mist around a mountaintop."

Understand, I am not an inveterate Bruce-basher. I own most of his albums and have seen him in concert about 15 times in the past three decades-plus, thoroughly enjoying every show (yes, even when he insisted on singing an endless version of the boring song "Mary's Place"). I was even there at Post College on Long Island in 1975 when Bruce may have debuted his timeless version of "Santa Claus is Coming to Town."

The marketing of Springsteen is paying great dividends. For his part, Springsteen is enjoying a remarkable success, even as he nears his 60th birthday in an industry where teen idols strongly outnumber guys with college-age kids.

When people call Springsteen "The Boss," they pay tribute to his uncanny ability to fill and thrill concert halls. Now, Springsteen is presiding over a masterful program that you could dub "2009 Super Bowl Marketing 101."

But Springsteen is persevering, and the Super Bowl, pitting the Pittsburgh Steelers against the Arizona Cardinals, has emerged as the linchpin to his marketing strategy.

What will he play?

One of the great parlor games taking place among sports and music fans is to guess what songs Springsteen will play at the Super Bowl.

But it would be lovely if Springsteen, a keen student of rock and roll history, took the occasion to pay even a brief tribute to Buddy Holly. On Feb. 3, music historians will mark the 50th anniversary of "The Day the Music Died," as Don McLean put it famously in "American Pie." On that sad morning, Holly, Ritchie Valens and the Big Bopper all died in a plane crash following a concert stop in Clear Lake, Iowa.

A Web site called BetUS.com has devised a betting line on, among other items, what Springsteen may play at the Super Bowl.

Click here to see what analysts at BetUS.com posted as the odds on the Super Bowl XLIII halftime show.

MEDIA WEB QUESTION OF THE DAY: What songs will Springsteen play at halftime?

Join the online community of Media Web readers by commenting directly on the story at MarketWatch.com.
By Jon Friedman