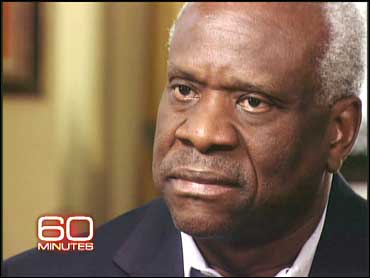 
If you really want to take the measure of Supreme Court Justice Clarence Thomas, don't bother reading his self-serving, cry-for-help book. And don't bother going into the archives to view or read the fawning interviews that accompanied it. Just read this week's big death penalty decision in a case involving a black man named Allen Snyder.

By a margin of 7-2, with conservative Justice Samuel A. Alito, Jr., writing the majority opinion, the Court Wednesday overturned Snyder's death penalty conviction and ordered a new trial after concluding that black jurors were illegally barred from his Louisiana trial. The Court's ruling was the latest in a recent series designed to rein in rogue prosecutors and recalcitrant judges who merely give lip service to the constitutional mandate that black jurors ought to be able to sit in judgment upon black defendants.

Snyder is no picnic. He allegedly murdered his estranged wife's boyfriend. But this case, this appeal, was not about his guilt or innocence or even any of the information offered at trial, before which the prosecutor told one and all that this was his "O.J. Simpson" case, a reference to a black defendant whom many believe got away with murder back in the fall of 1995. Snyder's trial was in 1996 - less than a year later.

The Snyder case instead is about what happened during jury selection. All five black jurors who made it through the initial screening were promptly eliminated by the prosecutor using his "peremptory strikes." These occur when either side in a case unilaterally rejects a potential juror before trial. Such strikes may not be based upon race. So Snyder's lawyers immediately (before trial) challenged two of the "strikes" on the grounds that they were unconstitutional. This required the prosecutor to justify his decision to eliminate the two people.

When he justified his decision to strike one such juror, the prosecutor said that the man looked nervous and might want to bargain in deliberations for a lower charge because he wanted to get back to his job as a student teacher. The trial judge immediately agreed with these justifications without making any sort of a factual finding that the prosecutor's concerns were based upon impressions the judge himself agreed with. This spur-of-the-moment bench ruling, the Supreme Court said, "fails even under the deferential standard of review" the trial judge gets in these types of cases.

What else? Here is what Justice Alito wrote: "The implausibility of [the prosecutor's] explanation is reinforced by the prosecutor's acceptance of white jurors who disclosed conflicting obligations that appear to have been at least as serious as Mr. Brooks'." In other words, the prosecutor bent over backward to remove black jurors from Snyder's trial and bent over backward to keep white jurors in the jury pool. The Supreme Court, then, issued a ruling that comports both with precedent and common sense-not always a guaranteed Quinella these days.

Two members of the Court did not see things that way. They would have supported both the two-faced prosecutor and the quick-draw trial judge. One of these Justices was Clarence Thomas, just the second black person to sit on Court. Despite the obvious scheme devised by the prosecutor - and endorsed by the trial judge - Justice Thomas declared that it was not the province of the Supreme Court to "second-guess" such judges when they make decisions about jury selection in capital cases.

Writing for his ideological brother Justice Antonin Scalia, Justice Thomas praised the "pivotal role" of the trial court. The prosecutor in Snyder's case, according to Thomas, offered "neutral" reasons for excusing the black jurors; reasons that the trial judge was right to accept and that the Supreme Court is wrong to reject. The majority was wrong, too, Justice Thomas declared, for comparing the white and black jurors who were excused by the prosecutor.

Go ahead and read both the majority and dissenting opinions and then ask yourself which one comports with your sense of justice and fairness. Under Justice Thomas' standard, apparently, a black defendant could successfully challenge the exclusion of a black juror from his case only if the prosecutor were so blatantly racist that the motives for the exclusion were clear for all to see. Those kinds of prosecutors - thankfully - no longer exist in this country. The law has exiled them into obscurity.

The Supreme Court this week said it will no longer countenance this charade. Justice Thomas said this week that the charade ought to be respected. He may be, as his recent book suggests, his "grandfather's son." But I doubt even Justice Thomas' grandfather would be pleased with the lengths to which his grandson has proven willing to go to keep alive in precedent among the last (and worst) vestiges of legal racism.