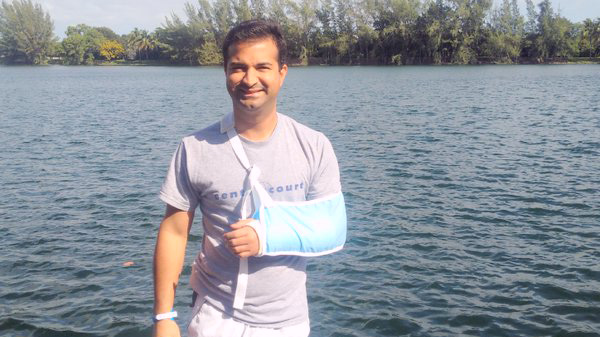 Rep. Carlos Curbelo, R-Florida, learned the hard way that one of this season's hottest toys is probably best left to his children.

Curbelo tweeted a photo of himself Saturday with his arm in a sling - and a message implying it was because of an accident on a hoverboard.

At least there were no "I-told-you-so's" from his colleagues.

One of the country's hottest Christmas gifts is also proving to be the most dangerous. In addition to the obvious injuries that could come from standing on a motorized, two-wheel device - fractures, sprains and concussions - many of the boards have been said to explode into flames. That particular safety concern led several major airlines to ban them from flights.

Curbelo wasn't the only public figure to fall victim to the clutches of gravity. Baseball player Dan Uggla was filmed riding a hoverboard with his kids - before he tumbled onto the concrete.