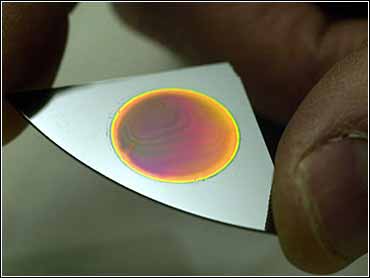 Scientists are working on a "smart bandage" that would detect specific bacteria in a wound and eventually may help people self-diagnose illnesses and free doctors to focus on more seriously ill patients.

Scientists at the University of Rochester have yet to incorporate a sensor chip onto a gauze dressing but once completed, the bandage would sense the germ and change color to alert a patient to the possibility of infection.

Among the bacteria the bandage potentially could pinpoint are those that cause strep throat and common-skin staph infections. Others such as E. coli, salmonella and listeria, which can cause abdominal cramps, fever and severe and bloody diarrhea, also are being targeted.

Eventually, patients would be able to treat their own infections by scanning the bandage into a personal computer with special software that identifies the bacteria and offers a solution via an online medical database, said Benjamin Miller, a chemist involved in the project.

It is increasingly important to monitor health at home because it saves unnecessary trips to the doctor's office, Miller said.

"Right now, our medical system is overwhelmed with many cases of relatively minor infections," he said. "If we can help shift some of the routine diagnoses to simple at-home tests, then we give physicians more time to treat patients with more serious ailments."

The "smart bandage," a sand grain-sized wafer of silicon chip, can differentiate between two classes of bacteria known as gram-negative and gram-positive, Miller said.

The bandage would be designed for use on any type of wound — including scrapes, cuts, punctures or lesions. Depending on the class of bacteria, patients would treat their infections with the appropriate antibiotic or other medicine.

In 1884, Danish bacteriologist Christian Gram developed a staining technique that classified bacteria based on the cell wall's ability to retain a dye. In the procedure, gram-positive bacteria stain purple, gram-negative red.

The "smart bandage" introduces a modern twist by performing the stain quickly and accurately. "The gram stain has been an important tool in analyzing bacteria for more than a century, but it's amazing to me that we're still using a procedure that's effectively out of the Stone Age," Miller said.

The adhesive's microscopic pores contain a synthetic chemical that binds to a fat molecule on the surface of a gram-negative bacteria like the potentially deadly E. coli and changes color from orange to red. A gram-positive bacteria wouldn't change color because it doesn't have the same fat molecule.

The bandage is still years away from the home market and more tests need to be done to determine how applicable it would be to treat infections, said Yank D. Coble, president-elect of the American Medical Association.

"Every test has a certain number of false positives and false negatives and patients need to be educated about that," Coble said. "It's certainly advsable to consult a doctor just to be clear."

It's also too soon to know how much the software and bandage would cost, but researchers anticipate it would be affordable.

Some experts say there are financial trade-offs to home-monitoring.

It's cheaper to go to the doctor since insurance companies subsidize those visits than it is to pay retail prices for medical devices to use at home, said Mark Speers, managing director of Health Advances, a health care consulting firm in Weston, Mass.

"Home-care monitoring is an inevitable evolution but I think it's more of an evolution than a revolution," Speers said.

ECI Biotech of Worcester, Mass., is creating a bandage to target bacteria but its method detects germs based on the proteins they release, company president Mitchell Sanders said. ECI is working on getting the detection device onto a dressing, but representatives won't say when they anticipate having the product ready to market.

If the Food and Drug Administration approves the "smart bandage" for home-use, it would join a list of other diagnostic products such as home pregnancy, blood sugar and cholesterol tests currently available over the counter.