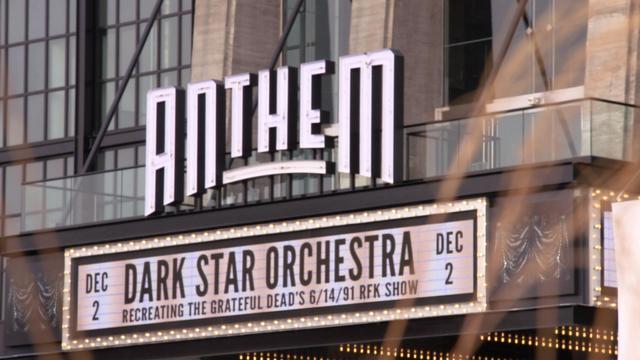 The Anthem, a new music venue in Washington, D.C., just opened in the city's revitalized Wharf district. It's an unlikely independent success story in an industry filled with global entertainment companies.

CBS News' Alex Wagner took a tour of the new neighborhood and venue with the two people who made it all happen.

Monty Hoffman's plan to redevelop a one-mile stretch of the Washington, D.C., waterfront took more than a decade and four acts of Congress before opening in October.  The three million-square-foot development known as The Wharf includes housing, retail and -- at its center -- The Anthem, built from the ground up.

"The city wanted us to put in arts ... We have lots of art galleries and museums here already in Washington, D.C., and music is a form of art. And so we were able to get the city to buy into music," Hoffman said.

Watch Morrissey perform at The Anthem in a special edition of Saturday Sessions:

Initially, they were talking to Live Nation about the venue. With 196 venues spanning 11 countries, Live Nation is the world's largest producer of live concerts, and the owner of Ticketmaster. A partnership with the Wharf's developers appeared inevitable.

"It's your classic case of, you know, the giant chain versus the local guy," said area concert promoter Seth Hurwitz. He is that local guy.

Hurwitz approached Hoffman with a proposal of his own.

"I introduced myself and cold called him, I guess you'd say," Hurwitz said.

"Seth is a real contrarian, and he's a local legend. And so he and I kind of hit it off from the beginning," Hoffman said.

Hurwitz was in fact a fierce critic of the 2010 Live Nation merger with Ticketmaster. He sued to prevent it from happening – and lost.

The loss didn't stop him from doing what he does best. He has promoted concerts in and around Washington, D.C., for nearly four decades. In 2013, Rolling Stone named his 1,200-capacity 9:30 Club the best big room in America. The Anthem is five times the size, but keeping the experience intimate was Hurwitz's primary goal.

"This is GA, general admission, which is really the signature of a club," Hurwitz said. "Everyone's just in this one room together. The band and the audience. When that happened here the first night with the Foo Fighters, it was like, 'Wow, this is really like a club. A 6,000-seat club,'" Hurwitz said of The Anthem.

Besides the Foo Fighters, The Anthem crowds have welcomed Bon Iver, LCD Soundsystem and Morrissey.

"I have to say, just about every single act that's played here has said 'this is the best venue we've ever played,'" Hurwitz said.

And then there's the lobby's soaring ceiling, which is also the bottom of a swimming pool for residents of the apartment building above.

"That was a big challenge for us ... So we brought in acousticians to work with the structural engineers. And we effectively cocooned the whole concert hall," Hoffman said. "So the vibration really is isolated to inside the concert hall. It can vibrate around, but the building on top doesn't know it's there."

The venue is a favorite among bands, audiences and even the developer.

\How is it all possible?

"Well, I don't really do things unless I find the right people. I have to say that I get a thrill every time I walk in this place," Hurwitz said. "I'm not one to brag, but I think I've created the best venue in the world."