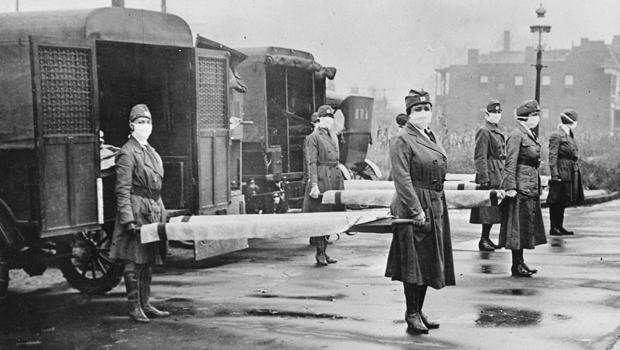 If the outbreak of COVID-19 has a bullseye in the U.S., it's Washington State. Schools and universities closed, a gauge of alarm here. Seen in Seattle: a lot of masks.

But not for the first time. Substitute Spanish flu for coronavirus, 1918 for 2020, and the headlines look familiar. Seattle seized by the Godzilla of modern pandemics.

"That's equivalent to 225 to 450 million people today," said John Barry, who wrote a history of the 1918 flu and is on the adjunct faculty of Tulane University. "The numbers are staggering.

"There was a mild spring wave that was hit-or-miss. It came back in the fall with more than a vengeance. Probably 60-70% percent of the deaths actually occurred in an incredibly short time of probably about 14 or 15 weeks, from late September 1918 through December, maybe a little into January."

In that time, during the final months of World War I, more soldiers died of the flu than were killed on the battlefield during four years of fighting.

As opposed to the coronavirus, the most vulnerable were in their twenties.

"The most horrific symptoms really were you could bleed not only from your nose and mouth, but from your eyes and ears," Barry said. "People were turning so dark blue from lack of oxygen that, in the book I quote one doctor writing a colleague saying that he could not tell white soldiers from African American soldiers."

It was called the Spanish flu. But that was only because Spain, which was not at war, allowed the press to report on it openly. Unlike here.

The first serious outbreak in the United States began at Camp Funston (now Fort Riley) in Kansas. As infected soldiers from across the country made their way to the trenches in France, the virus spread.

But the nation wasn't told.

A year earlier President Woodrow Wilson had rammed through Congress the Sedition Act, making it a crime to say or publish anything negative that would affect the war effort.

Barry said, "Wilson created what was called the Committee for Public Information. The architect of that committee said, 'Truth and falsehood are arbitrary terms. The force of an idea lies in its inspirational value. It matters very little if it is true or false.'"

Correspondent Martha Teichner asked, "Was that a license to lie to the American public?"

"It was precisely that," said Barry. "In the United States, you had national public health leaders saying such things as 'This is ordinary influenza by another name.' At the local level the same kind of thing was occurring."

With deadly consequences. No more so than in Philadelphia, which went ahead with a huge war bond parade in the fall of 1918 when the virus was at its most virulent. Newspapers killed stories quoting the medical community saying don't do it.

"So, 48 hours later, influenza exploded around the city," Barry said. "The result is, it's one of the hardest-hit cities in the world, and the mass graves being dug by steam shovels and so forth."

The death toll in Philadelphia was about 14,500.

Compare the signs that went up then to now; handwashing wasn't mentioned then. Americans could see for themselves in spite of what they were told. They thought they were less likely to catch the flu outside. They did whatever they could, given what they didn't know.

"Viruses would not be discovered for another 15 or 20 years," he said. "That's very different from today. We know what it is that is causing the disease."

Brown has written extensively about influenza, and argues that 2020 will not be another 1918 thanks to advances in science.

"Back in 1918, the basic treatments that were offered were enemas, whiskey, and bloodletting," Brown said. "Hospitals as we know them today were quite different. There were no intensive care doctors who really understand how to treat the very sickest patients. There were no antibiotics to treat any secondary infection. So, it was a very, very different time, and a very different way of practicing medicine back then."

But for John Barry, there is a takeaway from then that still applies: "The biggest lesson from the 1918 pandemic is clearly to tell the truth."

Teichner asked, "What are the consequences if the truth isn't told?"

"I think more people will die, yeah. Clearly that was the case in 1918. People can deal with the truth. It's the unknown that's much scarier."