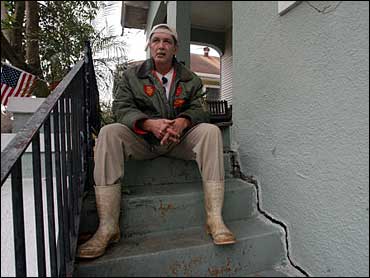 The high wooden porch slants toward the street. The twin steps are cracked. So is the plastered support between them.

"My wife and I, we'll lie in bed and notice a new crack every couple weeks," said Stalios C. Leres, who rents one side of the aging two-family house.

Southern Louisiana is sinking — houses, cemeteries, roads and all.

While most of North America rests on bedrock, New Orleans and the surrounding area are built on Mississippi River silt. And the silt is slowly settling and compacting because of gravity.

The settling has been going on for ages, but the surface really began dropping fast during the 20th century because of man's doing: The levees built to keep the Mississippi within its banks all but stopped the floods that used to lay down new layers of soil over the land.

Moreover, the human effects of the sinking are greater than ever simply because more people are living here.

Houses not built on deep pilings are tipping and cracking. So are streets, often rupturing water mains and sewer lines beneath them. Along parts of the coast, the ground is now under water, and some yards have become marshland.

The situation is so dire that some highways may be unable to serve as evacuation routes while a hurricane is approaching, the National Geodetic Survey recently warned. The roads themselves could be awash.

Among the solutions that have been floated: spreading fertilizer to stimulate the growth of plants, which trap soil and add to the dirt when they die. Also: digging a deep trench to divert the Mississippi River and its silt, or building pipelines to spread silt across the landscape.

But those solutions would work only on undeveloped land, not property that has already been built over.

"Say your neighborhood's 8 feet below sea level," said University of New Orleans geologist Shea Penland. "Are you going to say the government wants to cover your house in mud to raise the level?"

For lack of any better solution, houses have to be jacked up and stabilized one at a time. Some house levelers use a technique called "mudjacking" — drilling holes in the foundation, then pumping in a mixture of mud and cement under pressure to raise and level part of a building.

The sinking has run anywhere from 6 to 20 inches over the past 20 years, said Roy Dokka, a professor at Louisiana State University's Center for Geoinformatics. Penland disputed that, saying those figures apply only to the highways where the measurements were taken, not to southern Louisiana as a whole. The marshlands are sinking much more slowly, he said.

Whatever the case, there is "a huge trend of sinking throughout Louisiana, making it the hotspot of the country in terms of this kind of phenomenon," said geologist Stephen Leatherman of Florida International University.

Part of the problem is that silt is even finer than sand and compresses more easily.

In southern Louisiana, pilings often must be sunk 30 feet or more to get to sand dense enough to stabilize the buildings they bear. In Metairie and Kenner, just west of the city, a large building might need pilings up to 100 feet deep.

In Leeville, 60 miles southwest of New Orleans, the land has sunk 14 inches over the past 20 years. At Leeville's old cemetery, brick mausoleums that were on land back then are now under water.

The sinking in Louisiana is compounded by dry spells, which cause soil at the surface to shrink like a sponge left on a kitchen counter. Some say the settling is also worsened by drainage projects that lower the underground water level.

Not far from Leres' home, an auto dealership won $3.7 million in 1999 in a lawsuit against the Orleans Parish Sewerage & Water Board over damage from a drainage project. Hundreds of home- and business owners in the area have also sued.

The city of New Orleans has not had to have any buildings shored up, but spends $150 million a year to repair and replace streets damaged by subsidence, said Rosalind Cook, a spokeswoman for Mayor Ray Nagin. Subsidence is also one of the main causes of broken water and sewer lines.

In fact, many Louisiana homes built since the mid-1960s have flexible gas pipes to prevent disastrous ruptures caused by shifting foundations.

At the NASA Michoud Assembly Facility — the Lockheed-Martin-operated plant in New Orleans where the fuel tanks that have come under suspicion in the space shuttle Columbia disaster are made — the buildings are on pilings, but settling still causes occasional plumbing problems.

"Every now and then, we'll have an underground piping problem, like a water leak," plant spokesman Harry Wadsworth said. "It's a recurring nagging headache kind of thing. Nothing dramatic — just that recurring maintenance."