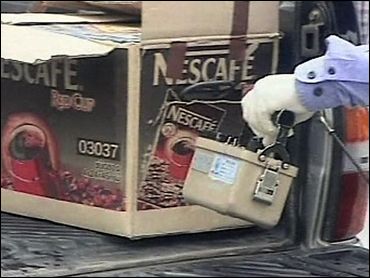 Alerted by U.S. investigators, undercover Thai police on Friday arrested a man selling radioactive material that can be used to make a so-called dirty bomb.

Officers arrested Narong Penanam, 44, in the parking lot of a Bangkok hotel after he offered to sell agents a metal container that he said contained uranium, police Col. Pisit Pisutisak said. Narong expected to be paid $240,000.

An analysis of the material by the Office of the Atomic Energy for Peace later revealed it was not uranium but cesium-137, which has a number of medical and industrial applications and can used in a bomb designed to spread radioactive material over a wide area.

Narong was charged with illegal possession of nuclear materials, punishable by up to one year in prison and a fine of $240.

Pisit said Narong told authorities he got the container from neighboring Laos and claimed his sources have more.

The investigation was initiated by the U.S. Customs Service, whose agents were present during the arrest, said a U.S. Embassy spokesman, on customary condition of anonymity.

A dirty bomb combines a conventional explosion with a radioactive fallout; in it, radioactive material is placed around an explosive device so that when the bomb explodes, poisonous particles are spread far beyond the area hit by the blast.

Thai Prime Minister Thaksin Shinawatra met this week with President Bush in Washington to discuss the "war on terrorism."

While Shinawatra was in Washington, Thai police arrested three men suspected of having links with Jemaah Islamiyah, a regional terrorist network.

Embassies in Bangkok were targeted in the attacks, the authorities said.

The Jemaah Islamiyah is blamed for last year's bombings in Bali that left more than 200 people dead, mostly Westerners. The group is believed to be linked to Osama bin Laden's al Qaeda network.