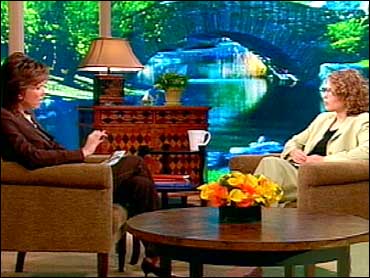 While most of the major world religions are based on peace, most terrorists are religious fundamentalists — using violence in the name of God, Allah, or Jesus.

Terrorism expert Jessica Stern was mystified by that seeming discrepancy and traveled the world to try to get into the minds of terrorists. "Terror in the Name of God: Why Religious Militants Kill" was the end result of the project.

Given the attack on the U.N. headquarters in Iraq, Stern tells The Early Show co-anchor Hannah Storm, "I'm deeply concerned that the war and, in particular what is perceived as an inept occupation, is bringing together a wide variety of groups that actually have different goals because they have a common enemy. And in Iraq, U.S. troops are a much easier target than they are in Afghanistan."

These terrorist groups are feeding off the public's unhappiness. Stern says, "There's increasing frustration with problems of the occupation, the difficulty in getting water, electricity, the lines for gasoline. That is helping the terrorist."

Some analysts say there is a concerted effort by terrorist groups to create chaos on many different levels in Iraq. Though Stern believes there is an effort to create chaos, she does not think it is a coordinated effort.

She says, "What's happening is individuals and small groups are acting with the same purpose, not necessarily coordinating their attacks."

Stern notes the reason why she believes the U.N. was targeted is because terrorist groups do not see its humanitarian and development purposes.

She says, "A number of these groups see the U.N. as an arm of U.S. and they talk about that explicitly. I remember a conversation with someone from Hezbollah who told me, for him, globalization is McDonaldization. Bin Laden talks about the U.N. as part one of the weapons of the United States."

Based on her research, she notes many of the people who end up being terrorists believe they are doing God's will at first. She says, "Over time, the leaders recruit youth into seeing the world in that way. I think some of them become quite cynical. They become professional killers."

Stern, formerly on the National Security Council and lecturer at the prestigious Kennedy School of Government at Harvard, says she had been researching the prospect of terrorists using weapons of mass destruction in her last book, and thought it would be interesting to talk to some of the people who had attempted or acquired biological agents.

Stern explains that one of her interviewees was a religious terrorist. Stern says she was driven to keep studying the connection between religion and terror once she started talking to someone who claimed to do terrible things because of his faith.

Read an excerpt from "Terror in the Name of God":

Second, terrorists use violence for dramatic purpose: instilling fear in the target audience is often more important than the physical result. This deliberate creation of dread is what distinguishes terrorism from simple murder or assault.

In this book, terrorism will be defined as an act or threat of violence against noncombatants with the objective of exacting revenge, intimidating, or otherwise influencing an audience. This definition avoids limiting perpetrator or purpose. It allows for a range of possible actors (states or their surrogates, international groups, or a single individual) and all putative goals (political, religious, or economic). This book is concerned only with terrorists who claim to be seeking religious goals, i.e, religious terrorism. It is limited to three monotheistic religions: Christianity, Islam, and Judaism.

As we shall see, most religious terrorists promote a mixture of religious and material objectives, for example, acquiring political power to impose a particular interpretation of religious laws or appealing to religious texts to justify acquisition of contested territory.

The characteristics of terrorism, as we have listed them, in turn raise additional questions. How do we define noncombatants? The term is controversial. A soldier on a battlefield is unquestionably a combatant, but what if his country is not at war, and he is sleeping, for example, in a military housing complex in Dhahran, as 19 U.S. soldiers were in June 1996 when they were killed by a bomb? What if he is riding a bus also carrying civilians, as happens regularly in Israel, when a suicide bomber attacked? What if the soldier's country is not at war, but he is working at a Defense Department office, as was the case for the 125 killed when Al Qaeda attacked the Pentagon on September 11, 2001?

A second thorny issue is the perpetrator of the violent act. Can a state commit acts whose purpose is to intimidate noncombatants, acts that might be labeled terrorism? The answer is yes. States can and do unleash terrorist violence against their own civilians, as Saddam Hussein did with chemical weapons against Iraqi Kurbs; as Stalin did, in acts of random violence against Soviet citizens; and as the Guatemalan government did for nearly forty years against its own people.

And states have also used terrorism as an instrument of war, by deliberately attacking civilians in the hope of crushing enemy morale. Although states frequently engage in terrorism, I am concerned in this book only with substate actors.

Two religious terrorist organizations from history are of particular interest for our purposes: the Zealots-Sicarii and the Assassins. The first was active around the time of Jesus Christ, the second during the eleventh to the thirteenth century. The technologies they employed were primitive: their weapons were the sword and the dagger. Nonetheless, these groups, inspired by religious conviction, were highly destructive and were active internationally.

A Jewish group, the Zealots-Sicarii, survived only twenty-five years, but profoundly influenced the history of the Jews. The Zealots murdered the individuals with daggers and swords. Later they turned to open warfare. Their objective was to create a mass uprising against the Greeks in Judea and against the Romans that governed both Greek and Jews. The revolt had unforeseen and devastating consequences, leading to the destruction of the Temple and to the mass suicide at Masada. Later revolts inspired by the Zealots-Sicarii led to extermination of the Jews in Egypt and Cyprus, the virtual depopulation of Judea, and the Exile itself, which, David Rapoport explains, became central features of the Jewish experience over the next two thousand years. "It would be difficult to find terrorist activity in any historical period which influenced the life of a community more decisively," he observes, though the influence was not what the terrorists had intended.

This excerpt is from the book "Terror In The Name Of God: Why Religious Militants Kill" by Jessica Stern, published by Ecco, an imprint of HarperCollins Publishers.