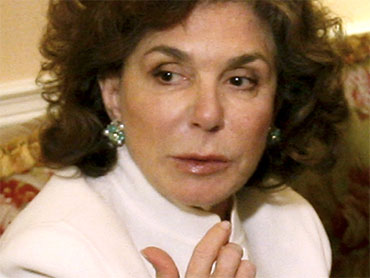 Teresa Heinz says she is being treated for breast cancer discovered through mammography and argues that younger women should continue undergoing the tests despite a federal panel's recent recommendation to reduce their frequency.

The 71-year-old wife of the 2004 Democratic presidential nominee, Sen. John Kerry, of Massachusetts, told The Associated Press that the cost of mammography is far lower than the physical and personal tolls women ages 40 to 60 face if their cancer goes undetected early and they later have to be treated with aggressive chemotherapy.

"Chemotherapy is serious. It also costs a lot of money. It's very painful. And it's very destructive of people's - most people's - lives for a while, anyway. So why put people through that instead of just having a test that's done, and it's done?" Heinz told the AP during an interview this week. "So that's why I was so upset about that decision of this panel."

She recalled nurses in a hospital where she was receiving a magnetic resonance imaging procedure, or MRI, being "so livid" when they heard the U.S. Preventive Services Task Force recommend last month that women start receiving mammograms at age 50, rather than the long-standing practice of 40.

"They said, 'We've taken all these years to teach women to do preventive mammograms, and now look at this,"' Heinz said.

President Obama's administration later backed off the recommendation amid criticism from many medical and women's groups. It said the government's policies "remain unchanged."

Kerry helped launch Obama on the national political stage by giving the then-Illinois senator the keynote speaking role at the 2004 Democratic National Convention.

Heinz - the widow of Sen. John Heinz, heir to the Heinz ketchup fortune - said she found out in late September that she had cancer in her left breast after having her annual mammogram. Heinz was born to Portuguese parents in what is now Mozambique.

In early October, she underwent lumpectomies on both breasts at a Washington hospital after doctors also discovered what they thought was a benign growth on her right breast.

That diagnosis was initially confirmed in postoperative pathology, but two other doctors later found it to be malignant. In November, Heinz had another pair of lumpectomies performed at Massachusetts General Hospital.

Doctors also inserted titanium clips in the tissue of both breasts during the operations, and next month she will receive five days of targeted radiation aimed at improving her odds of a successful treatment to 95 per cent.

Heinz said she is undecided about follow-up medicinal treatments that could raise her survival odds to 99 per cent, given her age and the potential side effects.

Her surgeon at Massachusetts General Hospital was the one she recommended to Elizabeth Edwards, who found out she had breast cancer just as her husband, former Sen. John Edwards, of North Carolina, was concluding his stint as Kerry's vice-presidential running mate.

Heinz said she has not spoken with Elizabeth Edwards about her own cancer bout.