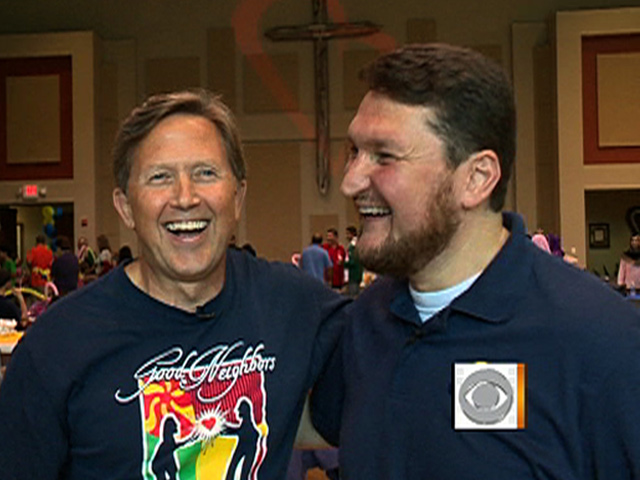 As the tenth anniversary of 9/11 nears, a new CBS News/New York Times poll shows that most Americans -- 78 per cent -- agree it's likely that Muslims, Arab-Americans and immigrants from the Middle East are singled out unfairly by people in this country.

But, reports "Early Show" co-anchor Chris Wragge, along with the stories of discrimination, there are those of mutual respect and acceptance.

Immediately after the September 11th attacks, Arab-American and Muslim communities became hard targets for hate, even though, in speech after speech, then-President Bush showed his support for Arabs and Islam.

In one speech, Mr. Bush said, "The face of terror is not the true faith of Islam. Islam is peace."

Just two days after the attacks, in a phone call to then New York City Mayor Rudy Giuliani and then New York State Gov. George Pataki, Mr. Bush said, "Our nation must be mindful that there are thousands of Arab-Americans who live in New York City who love their flag just as much as the three of us do."

But ignorance and hate had already taken root. On Sept. 12, police in Illinois stopped 300 people from marching on a Chicago-area mosque. Nearby, in Gary, Ind., a masked gunman shot 21 times at a Yemeni-American clerk. Days later, a Sikh man mistaken for a Muslim was shot and killed in Mesa, Ariz. In Irving, Texas, a mosque was hit by six bullets. A mosque in Brooklyn, N.Y. was the target of death threats. One phone caller said, "I hope they send all of you back. I hope they kill your people. Innocent people, also."

Following 9/11, reports of hate crimes against Arab-Americans, or those perceived to be, went up 1,700 percent.

While distrust and ignorance toward American Muslims remains a reality today, we found the opposite in one Tennessee community.

On one recent Sunday morning in Cordova, Pastor Steve Stone was rocking along with his congregation, clapping and singing along with the choir.

Heartsong Church, just outside Memphis, sits on a rural road -- directly across the street from a Muslim worship center.

When Dr. Bashar Shala, co-founder of the Memphis Islamic Center, or MIC, began construction two years ago, at best, he hoped to be ignored. Instead, Stone welcomed the Muslims with a surprise - a sign welcoming MIC to the neighborhood.

When they saw the sign, Shala said, "We knew that we have good neighbors."

Last year, while MIC's current building was under construction, the Muslims needed a place to pray during the holy month of Ramadan. Shala asked to use the church. Without hesitation, Stone said "yes."

Asked if he "thought it would be good for your community to have Muslims come into your church," Stone replied, "Oh. Yeah. We thought it'd be great. Be a good way to get to know each other."

Was Shala at all apprehensive?

"It really was not a huge leap for us to say, 'Well, we're not bringing the faith into the church, but we're just sharing as neighbors, our resources, as neighbors would."

Acting on the biblical phrase "love thy neighbor," the two sides forged a friendship that's now expanded to plans for building a park with land from both sides of the road, connected by a bridge or a tunnel, and to interfaith events, such as a joint Labor Day party.

One church member, Lee Raines, looking at tables with Muslims and Christians together, called it "awesome."

But Raines wasn't always so enthusiastic about his Muslim neighbors.

Raines wasn't alone. Twenty members left the church, but after some guidance from Stone, Raines stayed.

And he's glad he did. "They're normal people just like me and you," Raines says. "They have families, they've got kids, you know, they're running around, they enjoy sports just like I did, you know, they do the same things we do."

MIC member Irem Kahn, asked if she was skeptical when the whole idea of worshipping in a church was broached, responded, "In the very beginning, we were just like, 'Oh, we've never done this before, we've never prayed at a church before.' But then we realized it doesn't matter where you pray, they're all houses of worship."

Sundus Tameez 15, shares the same sentiment. A devout Muslim, the 10th-grader started wearing a headscarf, or hijab, a year ago, making her the first ever to do so in her school's 100 year history.

She says, "I feel like it's a blessing living in America as a Muslim, to go through this process ... explaining your faith and connecting with different people of other faiths."

Did Stone know anyone of the Muslim faith before this? "I knew one fella from the club where I work out," he replied. " ... That's the only person I knew. So I had fear and ignorance in me, but I didn't let that make the decision, and thank God I didn't -- because now I have - my cardiologist!"

Stone and Shala, the cardiologist, laughed and hugged as Stone said that.

"I've got a friend and a patient!" Shala noted.

Stone and Shala say they hope others will practice being good neighbors as they do. Not only have they fed the homeless and organized food drives together, this Sunday, on the 9/11 anniversary, they're hosting a joint blood drive.