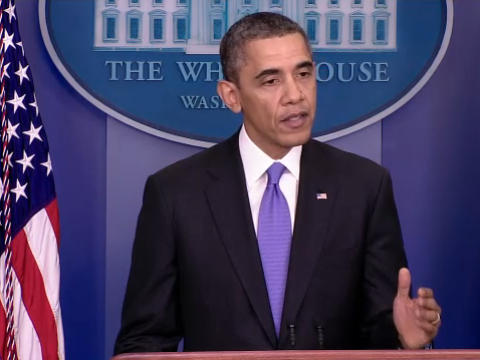 FAIRFIELD, Ohio - A southwest Ohio teacher who allegedly responded after a black high school freshman said he wanted to become president that the nation doesn't need another black president has been disciplined.

The Fairfield board of education this week suspended teacher Gil Voigt without pay. The Hamilton-Middletown Journal-News reported that board president Dan Murray said that the suspension is the first step in the termination process.

When a black student in the northern Cincinnati suburb earlier this month said he wanted to be president, the white teacher made an apparent reference to President Barack Obama, according to school officials, and allegedly said: "We don't need another black president."

Voigt, who has taught at Fairfield since 2000, reportedly told school officials he was misquoted. A telephone message left for him Friday wasn't immediately returned. He has 10 days after he is formally notified to appeal before the school board.

"He was talking to some students and said some things that were racially insensitive," Murray said. "We take diversity in our school district very seriously with tolerance of people who are different. We just felt this teacher had crossed the line."

School officials said the teacher had received a verbal warning in 2008 for an inappropriate racial comment and had received a written warning last month for failure to use the school's curriculum.