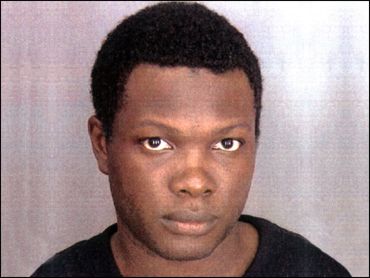 Charles D. McKinley had himself shipped from New York to Dallas in an airline cargo crate, startling his parents — and a deliveryman — when he broke out of the box outside their home.

"My husband asked him, `Man, what are you doing in this crate?' He said he was coming home," his mother told KDFW-TV in Dallas.

McKinley, 25, a shipping clerk from New York, was arrested and jailed on unrelated bad-check and traffic charges after his overnight odyssey. Federal officials are considering additional charges of stowing away on a plane.

In a rambling jailhouse interview, McKinley told KXAS-TV in Dallas that he made the trip because he was homesick and a friend thought he could save money by flying as cargo. McKinley said he took no food or water on the 15-hour journey, just a cell phone, which did not work.

Before setting out, McKinley filled out shipping instructions saying the crate held a computer and clothes. Authorities believe he had help from at least one co-worker at the warehouse where he works in New York when he loaded himself in the box.

The box was taken by truck from New York's Kennedy Airport to New Jersey. Then it was loaded onto a pressurized, heated cargo plane operated by Kitty Hawk Cargo. It flew from Newark, N.J., to Niagara Falls, N.Y., then to the carrier's hub in Fort Wayne, Ind., and on to Dallas, the FBI said.

On Saturday, Billy Ray Thomas, a driver for Pilot Air Freight, picked up the crate at Dallas-Fort Worth Airport and delivered it to McKinley's parents' home in suburban DeSoto.

When Thomas went to unload the 350-pound crate from his truck, he saw a pair of eyes and thought there was a body inside.

Authorities said they did not know whether McKinley had any toilet facilities. But the stowaway told the TV station that got out of the crate during flights once or twice and walked around.

His box was carried in the pressurized, heated cabins, but could just as easily have been placed in the lower, unpressurized holds, said Richard G. Phillips, chief executive of Pilot Air Freight.

"He could easily have died," Phillips said.

The freight cost — billed to McKinley's employer — was $550. At that rate, "he could have flown first-class," Phillips said.

Investigators from the federal Transportation Security Administration interviewed McKinley twice to learn how he got past security.

"We're not aware this has happened previously, so obviously it's something we are investigating aggressively," TSA spokeswoman Suzanne Luber said.

Air cargo receives less federal security attention than passenger planes, in part because of its sheer volume, and critics have suggested that terrorists could use cargo flights as weapons.

Other than the federal statute, District Attorney Bill Hill said he could not cite any law that McKinley broke.

"He violated the law of stupidity if nothing else," Hill said.