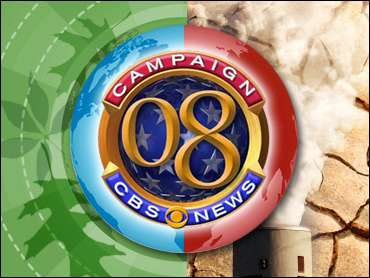 This column was written by Mark Hertsgaard.

It's been a long time coming, but the United States is finally going to have a President who takes climate change seriously enough to do something about it.

The day before Senator Barack Obama clinched the Democratic Party's nomination for president, his colleagues in the United States Senate began preparing for the biggest global warming vote in Washington's history. The bill under debate, The Climate Security Act would for the first time impose large, mandatory cuts on greenhouse gas emissions in the US. The bill was not expected to become law, if only because of President Bush's promised veto, and by the end of the week stalling tactics by Senate Republicans had blocked the bill from even coming to a vote. Nevertheless, the Senate debate was a defining moment in US climate politics, not least for what it revealed about how the next President -- either Obama or Senator John McCain -- will address the climate issue when he takes office in 2009.

In contrast to Bush, both McCain and Obama have long said that climate change is a top-priority threat that requires real action now. Environmentally, Obama's proposals are stronger. The Democrat favors what science says is necessary: an 80 percent cut in emissions by 2050. As President, Obama would achieve this through a "cap and trade" system that sells corporations permits to emit greenhouse gases and then invests the resulting revenue in green energy development and rebates to Americans hit by higher energy prices.

McCain, however, can rightly point out that he has been talking about climate change longer than many Democrats; the Republican co-sponsored the last important Senate climate bill, in 2005. McCain says he supports a 60 percent emissions cut by 2050. But it is doubtful his proposed approach would actually deliver such large cuts, since his cap-and-trade system would give most permits away for free, a provision environmentalists attack as a corporate giveaway. Obama would sell all emissions permits at auction. Obama is also much less enthusiastic than McCain about nuclear power as a response to climate change.

The Climate Security Act aimed to reduce US greenhouse gas emissions by 19 percent by 2020 and 71 percent by 2050, again through a cap-and-trade system. Thus the bill went further than McCain's proposal but fell well short of Obama's. It also confronted both candidates with a political minefield. With gasoline hovering near $4 a gallon in the US, politicians were wary of any measure that might raise prices even higher. Further complicating matters was an explosive new scientific study that warned that reversing climate change would require a swift end to burning coal. Neither candidate was likely to endorse that idea (though Obama's website said he'd consider it), since it would all but doom the candidate's chance to win in Appalachia and other coal regions in the general election in November.

The coal ban recommendation came from James Hansen of the NASA space agency, the dean of America's climate scientists. In April, Hansen co-authored a study that found that global greenhouse gas emissions must be cut much more sharply than anyone had previously assumed if humanity wished to avoid the worst scenarios of climate change, including a melting of polar ice that would eventually raise global sea levels by twenty-five meters, putting most of civilizations under water. The concentration of carbon dioxide in the earth's atmosphere in 2007 was 385 parts per million and climbing 2 ppm a year. Alarmingly, Hansen's study concluded that 350 ppm is the maximum level compatible with a livable planet. In other words, humanity is already in the danger zone and must reverse course rapidly.

"We need a moratorium on the construction of traditional coal-fired power plants by 2010 and a phase-out by 2030," Hansen said in an interview. This farewell to coal "has to be global," the NASA scientist added. That means it must include China and India, which won't be easy; both countries insist that burning coal is essential to lifting their people out of poverty.

Yet eliminating coal-burning is not as unthinkable as it recently seemed. Already about sixty of the 150 US coal plants planned a year ago have been cancelled and another fifty are being contested. And, Hansen noted, a recent article in Scientific American suggested that solar thermal power could supply all of America's electricity. A self-described political conservative, Hansen blamed "special interests" for blocking these and other green energy solutions. "There's no reason we can't make the changes necessary except that the fossil fuel industries are determining governments' policies," he said.

The Climate Security Act was a case in point, argued Friends of the Earth and Greenpeace, which urged defeat of the bill if it was not strengthened. Contrary to the bill's stated goal of 71 percent emissions cuts by 2050, the US Environmental Protection Agency estimated that it would deliver cuts of just 25 percent. Why? Largely because the bill gave away for free 49 percent of the emissions permits, thus reducing the incentive for corporations and consumers to switch to greener energy sources.

But even this corporate-friendly approach did not satisfy Senate Republicans, most of whom deny that climate change is real in the first place. Using blatant delaying tactics, including a demand that the entire 491-page bill be read aloud on the Senate floor, Republicans succeeded in a filibuster that blocked the full Senate from voting on the bill, which they labeled a giant tax increase.

Both Obama and McCain told the bill's sponsors they would have voted for it, however, and that is what matters most going forward. The real fight over a new American policy on climate change comes next year, when a new Congress and President tackle the issue afresh. Despite the weaknesses of the Climate Security Act, the fact that it reached the Senate floor marked real progress; the bill's rhetorical commitment to 70 percent emissions reductions went well beyond what was considered politically realistic on Capitol Hill even a year ago. But the Earth does not compromise. If Hansen and other scientists are right, the US will have to take much larger steps, soon, if humanity is to salvage a livable planet.
By Mark Hertsgaard
Reprinted with permission from The Nation