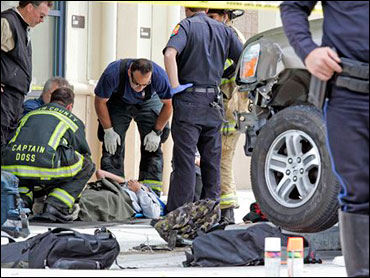 A sport utility vehicle jumped a curb and plowed into a group of middle school students waiting for a bus, authorities said. Three teenagers were in intensive care Thursday.

About half a dozen children were hit, including several who were trapped under the SUV when it struck a tree outside Ralston Middle School on Wednesday, Police Lt. Dan DeSmidt said. Parents and staff used a jack and collective muscle to lift the SUV and rescue the trapped children, he said.

"At least two or three kids were pinned under the SUV" when it flipped onto its side, Leonard Weinrob, who was picking up his son when the crash occurred, told KPIX.

Police said the children may have escaped getting crushed because of the SUV's relatively high clearance and the angle at which it landed.

"They are little kids and they can fortunately fit under there," Lt. DeSmidt told KPIX.

Fire Chief Doug Fry said 13 children and the SUV's driver were taken to hospitals. Seven went to trauma centers with problems ranging from broken bones to internal injuries, he said.

Other students were injured or shaken up as they tried to escape the oncoming car, DeSmidt said.

The crash occurred around 12:30 p.m. as school was letting out early for the day because of standardized testing, Principal Maggie O'Reilly said.

Witnesses said the 2004 Honda Pilot was in the parking lot of Ralston Middle School when it hit the students and came to rest outside the gymnasium.

"All I can say is for some unknown reason the SUV lost control," Fry said.

The driver was at the school in Belmont, about 25 miles south of San Francisco, to pick up a student, although DeSmidt said he did not know his relationship to the youngster.

The Honda was registered to Mauro H. Yan and Lorenza Y. Yan, of Redwood Shores, according to the Department of Motor Vehicles.

A woman who identified herself as Mauro Yan's wife but would not give her name told the San Francisco Chronicle her 70-year-old husband was driving, and that he thought the SUV's brakes had failed.

At the scene, investigators combed through debris, including the SUV's front grill and discarded sneakers and backpacks. They noted the absence of skid marks that would have indicated the driver tried to stop, but said it was too soon to draw conclusions about what that meant.

"It certainly all falls into the investigation, but at this point we have no cause to believe it was an intentional act," DeSmidt said.

Head custodian and track coach Andre Edwards said a student he pulled from under the SUV was bleeding but conscious.

One had a lacerated liver and a broken ankle, another required 30 stitches to close lacerations on his head and leg, a third boy fractured his pelvis and the fourth had a head injury, he said.

Three of the four were in intensive care and in serious condition, he said. The fourth boy was held overnight for observation of his head injuries.

Several other hospitals reported receiving patients involved in the crash; some had been treated and released by late afternoon.

Counselors and psychologists from neighboring schools have volunteered to help provide support for youngsters returning to school Thursday, many of whom witnessed the crash or its aftermath, said Dr. Emerita Orta-Camilleri, superintendent of the Belmont-Redwood Shores School District.

"It happened right as school let out so I'm sure a lot of students saw what happened," said Lawrence Chu, office manager at Fellowship Bible Church, which is near the school.