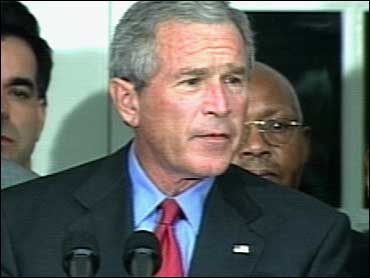 Three days after Hurricane Katrina demolished much of the Gulf Coast, the race is on to rescue survivors and provide aid to the affected areas.

CBS News Correspondent John Roberts reports from New Orleans that rescuers kept up a frantic pace Wednesday. Army helicopters picked up people off roofs and hundreds of boats were launched to search for the missing.

New Orleans Mayor Ray Nagin has ordered 1,500 police to leave their search-and-rescue mission for hurricane victims Wednesday night and return to the streets to stop the looting.

"They are starting to get closer to heavily populated areas: hotels, hospitals, and we're going to stop it right now," Nagin said.

The number of officers called off the search-and-rescue mission amounts to virtually the entire police force in New Orleans.

Amid the turmoil Wednesday, thieves commandeered a forklift and used it to push up the storm shutters and break the glass of a pharmacy. The crowd stormed the store, carrying out so much ice, water and food that it dropped from their arms as they ran. The street was littered with packages of ramen noodles and other items.

The city's emergency response has been stretched well beyond the breaking point, Roberts reports. In the flooded downtown hospitals, officials said today dozens of patients are at risk of dying if they can't be evacuated.

While Roberts notes that the water has stopped rising in New Orleans, officials attempting to drain the flooded city have called the task an "engineering nightmare."

On Wednesday, President Bush assessed the dire situation, saying that while help would be arriving quickly, "this recovery will take years." Mr. Bush called the storm "one of our worst natural disasters in our nation's history."

During his speech on the White House lawn, the president added, "This is going to be a difficult road," he said. "The challenges we face are unprecedented."

After noting the numerous rescue and recovery efforts taking place throughout the Gulf Coast, Mr. Bush said he was confident that "the great city of New Orleans will be back on its feet."

The U.S. government declared a public health emergency for the entire Gulf Coast Wednesday. Also, 10,000 more National Guard troops have been activated for duties on the ravaged Gulf Coast.

Michael Leavitt, secretary of Health and Human Services, announced that he had declared a public health emergency in the area stretching from Louisiana to Florida. "We are gravely concerned about the potential for cholera, typhoid and dehydrating diseases that could come as a result of the stagnant water and the conditions," he said.

"We know there is a significant number of dead bodies in the water," and others dead in attics, Nagin said Wednesday during an impromptu news conference at the Hyatt Hotel. Asked how many, he said: "Minimum, hundreds. Most likely, thousands."

If the mayor's estimate holds true, it would make Katrina the nation's deadliest hurricane since 1900, when a storm in Galveston, Texas, killed between 6,000 and 12,000 people.

Nagin said it will be at least two or three months before the city has electricity. Restaurants won't be able to open and there won't be any commerce, he said.

Leavitt urged residents of the coastal area to boil water and follow food safety precautions and to avoid situations that might lead to carbon monoxide poisoning from electricity generators.

Food, drinking water and shelter were in short supply in coastal Louisiana, Mississippi and Alabama.

There will be a "total evacuation of the city. We have to. The city will not be functional for two or three months," Nagin said.

The levee breaches had allowed water from Lake Pontchartrain to inundate sections of New Orleans. An estimated 80 percent of the city was under water, up to 20 feet deep in places, with miles and miles of homes swamped.

"This is the bowl effect that everyone has been talking about," Nagin told CBS affiliate WWL. "Water is now going to fill the bowl on the east bank."

The Army Corps of Engineers said it planned to use heavy-duty Chinook helicopters to drop 3,000-pound sandbags Wednesday into a 500-foot gap in one of the failed floodwalls. But the agency said it was having trouble getting the sandbags and dozens of 15-foot highway barriers to the site because the city's waterways were blocked by loose barges, boats and large debris.

As the situation in the smelly and sweltering Superdome became more desperate, authorities found a new home for the building's nearly 25,000 hurricane refugees: the Astrodome in Houston.

The Federal Emergency Management Agency has provided about 500 buses to transport the refugees, and early Thursday, the first caravan of buses from the Superdome arrived at the Houston Astrodome, which is being turned into a temporary shelter.

Short tempers fueled by long lines heightened tensions in New Orleans as people are anxious to get out of the flood ravaged city, and into the air conditioned dome where they will be fed and will have water and other facilities at their disposal.