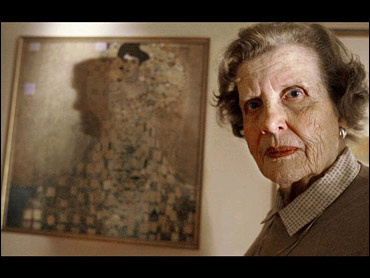 A World War II-era international fight over famous Austrian art has captured the attention of the Supreme Court.

More than 65 years after the Nazis pillaged the belongings of a Jewish sugar magnate in Vienna, the man's niece is asking the court to help her recover $150 million worth of paintings they stole.

Maria Altmann of Los Angeles wants the justices to open up U.S. courts to old disputes with other governments. Her lawyer was arguing at the Supreme Court on Wednesday.

If she should win, she could resume her federal court lawsuit to recover six Gustav Klimt paintings, including two impressionistic portraits of her aunt. They are now part of the Austrian Gallery's popular Klimt collection.

A victory for the 88-year-old woman, critics warn, could lead to lawsuits in American courts against galleries worldwide and would revive old allegations of government misconduct.

Two other cases involving similar issues already are pending at the Supreme Court: appeals that involve a lawsuit against Japan by women who claim they were used as sex slaves during World War II and a lawsuit by Holocaust survivors and heirs against the French national railroad for transporting more than 70,000 Jews and others to Nazi concentration camps.

"Every major museum in the world has property that arguably has been expropriated by somebody," said Scott P. Cooper of Los Angeles, one of Austria's lawyers.

He said Altmann's plight is compelling: She escaped the Nazis and eventually became a U.S. citizen. "It has created sympathy in the courts below, but I don't believe the Supreme Court is going to be distracted by the individual facts in this case," he said.

Altmann's aunt, Adele Bloch-Bauer, died in 1925 after asking that the art be donated to the government gallery. Her uncle died in exile in Switzerland at the end of World War II and left his possessions to Altmann and two of her siblings. Only Altmann is still alive.

Austria argues that it rightfully owns the paintings. It says a member of Altmann's family gave the Klimt paintings to the museum, as her aunt had requested in her will. Altmann's lawyers contend the will was invalid.

The Bush administration supports Austria. Solicitor General Theodore Olson told justices in a filing that "the United States has strongly condemned the Nazi atrocities, and it has sought to rectify Nazi wrongs through diplomatic and other means."

The government has not, however, authorized U.S. courts to resolve war-related claims, he said.