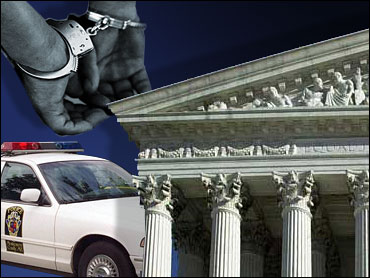 The Supreme Court ruled Thursday that police armed with a warrant can barge into homes and seize evidence even if they don't knock, a huge government victory that was decided by President Bush's new justices.

The case tested previous court rulings that police armed with warrants generally must knock and announce themselves or they run afoul of the Constitution's Fourth Amendment ban on unreasonable searches.

"The Supreme Court has been gradually upgrading police search powers," CBS News correspondent Barry Bagnato says. "This is another step in that direction."

Justice Antonin Scalia, writing for the majority, said Detroit police acknowledge violating that rule when they called out their presence at a man's door then went inside three seconds to five seconds later.

"Whether that preliminary misstep had occurred or not, the police would have executed the warrant they had obtained, and would have discovered the gun and drugs inside the house," Scalia wrote.

But suppressing evidence is too high a penalty, Scalia said, for errors by police in failing to properly announce themselves.

The outcome might have been different if O'Connor were still on the bench. She seemed ready, when the case was first argued in January, to rule in favor of Booker Hudson, whose house was searched in 1998.

O'Connor had worried aloud that officers around the country might start bursting into homes to execute search warrants. She asked: "Is there no policy of protecting the homeowner a little bit and the sanctity of the home from this immediate entry?"

She retired before the case was decided, and a new argument was held so that Justice Samuel Alito could participate in deliberations. Alito and Bush's other Supreme Court pick, Chief Justice John Roberts, both supported Scalia's opinion.

Hudson's lawyers argued that evidence against him was connected to the improper search and could not be used against him.

Scalia said that a victory for Hudson would have given "a get-out-of-jail-free card" to him and others.

In a dissent, four justices complained that the decision erases more than 90 years of Supreme Court precedent.

"It weakens, perhaps destroys, much of the practical value of the Constitution's knock-and-announce protection," Justice Stephen Breyer wrote for himself and the three other liberal members.

Breyer said that police will feel free to enter homes without knocking and waiting a short time if they know that there is no punishment for it.

Justice Anthony M. Kennedy, a moderate, joined the conservatives in most of the ruling. He wrote his own opinion, however, to say "it bears repeating that it is a serious matter if law enforcement officers violate the sanctity of the home by ignoring the requisites of lawful entry."