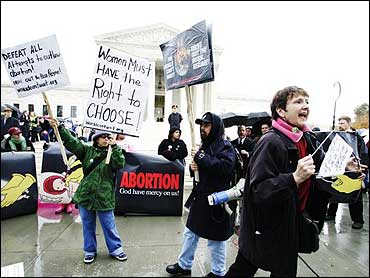 Court justices Wednesday sharply questioned attorneys on both sides of the legal battle over late-term abortions as the high court weighed whether to uphold Congress' ban on the procedure.

In an intense morning of arguments, lawyers for the Bush administration and supporters of abortion rights gave starkly contrasting views: A law passed by Congress labels it a gruesome and inhumane practice. Supporters argue that such abortions in the second trimester of pregnancy sometimes are the safest for women.

An anti-abortion protester began shouting midway through the proceedings, disrupting the hearing briefly before police dragged him away. Rives Miller Grogan, whose last known address was in Los Angeles, was charged under a law that makes it a crime to give "a harangue or oration" or to utter loud, threatening or abusive language in the Supreme Court building. If convicted, he could face up to 60 days in jail.

Seven justices took part in questioning both sides about whether the court should defer to congressional findings that these abortions are never medically necessary. Abortion advocates disagree, saying there is strong medical evidence to the contrary.

"We have no evidence in the record" as to how often such a situation arises? Roberts asked.

"No, your honor," replied attorney Priscilla Smith, who argued for striking down the federal law.

Justice Ruth Bader Ginsburg questioned the rationale that abortion opponents are using in the case, pointing out that the assertion that late-term abortion is a particularly gruesome procedure also could apply to the most commonly used method of abortion in the second trimester.

Ginsburg asked whether the procedures in the two types of abortions are "basically the same," making it hard to distinguish whether a doctor could be prosecuted for performing the banned method.

At issue is the fate of the Partial-Birth Abortion Ban Act, which Congress passed and President Bush signed into law in 2003.

Six federal courts on both coasts and in the Midwest have struck down the law as an impermissible restriction on a woman's constitutional right to an abortion that the Supreme Court established in its landmark Roe v. Wade ruling in 1973.

A day earlier, abortion was on several state ballots. In South Dakota, voters repealed a state law that virtually outlaws abortions, an issue that itself could end up before the court.

California and Oregon voters rejected measures that would have required that teenagers get their parents' consent before having an abortion.

A long line of people hoping for a seat inside stretched across the court's plaza hours before the session was to begin. Dozens of people camped through a rainy night in Washington to ensure their place near the head of the line.

Partial-birth abortion (as opponents call it) is not a medical term, but abortion opponents say it accurately describes "a rarely used and gruesome late-term abortion procedure that resembles infanticide," as Clement said in court papers. Clement will argue the case for the administration.

Abortion-rights proponents dispute almost every aspect of the government's case, including the name for the procedure. They say the law has a much broader reach than the government claims and would threaten almost all abortions that take place after the third month of pregnancy.

Doctors most often refer to the procedure as a dilation and extraction or an intact dilation and evacuation abortion. It involves partially extracting a fetus from the uterus, then cutting or crushing its skull.

The procedure appears to take place most often in the middle third of pregnancy. There are a few thousand such abortions, according to rough estimates, out of more than 1.25 million abortions in the United States annually. Ninety percent of all abortions occur in the first 12 weeks of pregnancy, and are not at issue.

By a 5-4 vote, the court invalidated a similar law in Nebraska in 2000 because it encompassed other abortion methods and did not contain an exception that would allow the procedure to preserve a woman's health, an underpinning of Supreme Court abortion rulings.

Two things have changed in the past six years, the composition of the court and Congress' involvement in the issue by tailoring a law to overcome the objections raised by justices in the Nebraska case.

Abortion opponents are optimistic the court will uphold the law because Justice Sandra Day O'Connor, part of the majority in the 2000 case, has retired and her place was taken by Alito.

Bush appointed both Roberts and Alito, and most legal analysts believe that neither man will be especially supportive of abortion rights.

Justice Anthony Kennedy, the court's swing voter following O'Connor's departure, dissented so strongly in the Nebraska case that many court observers believe he is unlikely to switch sides.