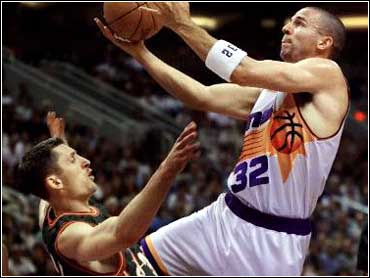 In the growing rivalry between Jason Kidd and Gary Payton, give this round to Kidd.

Kidd had 22 points, 12 assists and seven rebounds Sunday night to lead the Phoenix Suns to a 105-93 victory over the Seattle SuperSonics.

The teams split their season series 2-2, with the outcome always linked to the matchup between Kidd and Payton, who both grew up in the Bay Area and are perhaps the best two point guards in the game.

"I don't know how many times we've played against each other," Kidd said, "but whoever has had the upper hand in terms of scoring and assists has probably won the game."

Friday night, Payton got the best of Kidd and the Sonics won 94-86 in Seattle. On Sunday, Payton had 13 points on 4-for-18 shooting and scored one point in the second half. He had seven assists and seven rebounds.

Kidd, who had 16 points and eight assists in the second half, said he likes to go against Payton.

"We enjoy the rivalry," Kidd said. "We're friends off the court and we're friends on the court, but the biggest thing is we both want to win."

Rodney Rogers, who had a season-high 26 in Seattle, was 8-for-12 for 22 points Sunday. Penny Hardaway added 19 points and six assists for the Suns. Tom Gugliotta scored 13 of his 16 points in the second half and grabbed nine rebounds for Phoenix.

"It was probably one of our best defensive quarters," Suns coach Scott Skiles said. "Jason did a great job on Payton and Googs was all over the place. All five guys just played great defense and that led to easy baskets."

After a close first half, the Suns scored nine in a row to take a 57-47 lead on Kidd's 3-pointer with 8:45 left in the third quarter. After Seattle cut it to 64-58 on Chuck Person's 3-pointer, Phoenix outscored the Sonics 13-4 over the last three minutes of the third to go up 77-62 entering the final quarter.

Seattle coach Paul Westphal, who used to coach the Suns and once was a star player for Phoenix, was ejected from the game on two technicals from referee Jack Nies with 7:49 to play. Kidd made both free throws to give Phoenix its largest lead, 90-70.

As he left the court, Westphal walked directly under his photo on the Suns' "ring of honor."

Westphal didn't want to talk about the ejection.

"What do I need to do? Talk about it and get fined," he said. "I've been ejected a lot.

Neither team led by more than five points in the first half. The Suns led 46-45 at the break.