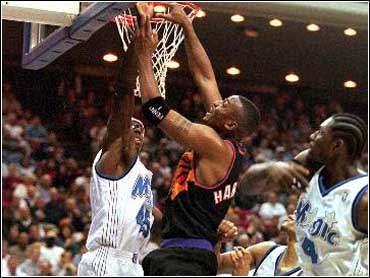 Penny Hardaway had more than harsh words for his former team in his first trip back to Orlando.

The four-time All-Star, booed virtually every time he touched the ball, scored 21 points Monday night to help the Phoenix Suns beat the Magic 117-113.

"It's just a part of the game. I couldn't do anything about it. All I could do was come out and help our team get a victory," Hardaway said.

Hardaway, traded to Phoenix last summer, missed 9 of his last 11 shots, but went 11-for-14 from the foul line in his sixth game back since missing 21 games with a muscle tear in his right foot.

Not every fan showed up to vent their frustration over Hardaway's bitter split from the Magic, the team he helped lead to one appearance in the NBA Finals.

One fan held up a sign, declaring: "In Penny We Still Trust," and several others also displayed supporting the Suns guard.

"It was emotional at first, but I understand how the business goes," Hardaway said. "I learned a lot of stuff while I was here and mostly it was how to deal with a lot of things. Fans are fickle. I was in that situation a lot when I was here with the Magic."

Clifford Robinson had 28 points and Jason Kidd scored 20 and had 14 assists for the Suns.

Darrell Armstrong had 26 points and 11 assists for the Magic, who trimmed a 25-point, second-half deficit to 108-106 before the Suns put the game away.

"It's always sweet to beat your old team, especially in the first game," said Hardaway, who also had four rebounds, four assists and blocked two shots in 40 minutes.

The Orlando Arena crowd of 13,677 nearly 3,600 less than capacity booed Hardaway during pregame warmups and also relished every time he was whistled for a foul or misse a shot.

In six seasons in Orlando, the 28-year-old guard helped the Magic to five playoff appearances, including the trip to the Finals in 1995.

But management and fans grew weary of critical statements Hardaway often made in response to what he perceived as unfair expectations of him once Shaquille O'Neal left the team for the Los Angeles Lakers.

He reopened some of the wounds earlier in the day when he complained again about the way the Magic handled his becoming a free agent last summer.

Hardaway criticized owner Rich DeVos for underestimating his worth and said he essentially was forced out of Orlando.

O'Neal bolted town for the Lakers in 1996. Rather than risk losing Hardaway without compensation, the Magic sent him to Phoenix in a sign-and-trade deal in exchange for Pat Garrity, Danny Manning and two future first-round draft picks.

The trade was part of a major roster overhaul designed to free room under the salary cap and build a younger, more athletic team under first-year coach Doc Rivers.

The Magic potentially could have two top-10 draft picks next summer and expect to be a position to aggressively pursue one or two big-name free agents.

Orlando is close to tinkering even further with its roster, agreeing to a five-player trade with Denver on Monday night.

The deal, which will be completed on Tuesday according to players involved, sends forward Chris Gatling and guard Tariq Abdul-Wahad, plus a future first-round draft pick to Denver for forward Ron Mercer, guard Chauncey Billups and former Magic first-round pick Johnny Taylor.

Hardaway took a swipe at the rebuilding plan, saying other players will take note of how a once-dominant team was gradually dismantled.

"I don't understand why somebody would come here anyway. If somebody already is in a (good) situation just because they're under the cap and have lottery picks why would somebody want to come here after I've gone and Shaq's gone? What does that say?"

Hardaway made his first three shots on his way to 12-first half points. Kidd had 15 at the break on 6-of-7 shooting, helping the Suns take a 62-50 lead.

Rivers said he thought Hardaway's quick start helped the rest of the Suns settle down.

"Sometimes in a situation like that, a guy's teammates are waiting to see how he handles it ... hoenix had something to play for tonight," Rivers said. "They were going to rally behind Penny to get him a win."

The Suns led by 25 with just over five minutes left in the third quarter. The Magic pulled within two, 108-106, on Armstrong's 3-pointer but couldn't get closer down the stretch.