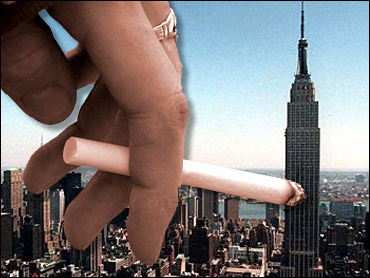 As numbers of U.S. adults who smoke continues to decline, smoking among women in the United States has dropped below one in five for the first time in nearly 30 years, the government said Thursday.

The Centers for Disease Control and Prevention reported that 21.6 percent of U.S. adults smoked in 2003, down slightly from 22.5 percent the year before. Smoking in the United States has generally declined year after year over the past two decades.

Despite the decline, the United States is still far from its 2010 goal of reducing smoking to 12 percent of adults, or about one in eight.

This marks a decline from 22.5 percent in 2002 and 22.8 percent in 2001. In addition, the 46 million adults who have quit smoking now outnumber the people who continue to smoke. This is the second year in a row this has occurred, the researchers said.

"We found continued slow but steady progress in reducing adult smoking prevalence," said study co-author Dr. Dave Nelson, a senior scientific advisor at the National Center for Chronic Disease Prevention and Health Promotion. Nelson noted that the decline in smoking has been going on for the past 25 years.

The new report, which appears in the May 27 issue of the federal Centers for Disease Control and Prevention's Morbidity and Mortality Weekly Report, contains some additional new findings.

"For the first time since we began collecting this data in 1965, smoking among women has declined below 20 percent," Nelson said.

In addition, the number of young adult smokers has also declined. "After some increases during the 1990s, this is the first time we have seen a decline in smoking among persons aged 18 to 24," Nelson said.

While overall the number of smokers in the United States has continued to drop, there are segments of the population where smoking is still rising. "There are still some groups that have higher smoking prevalence," Nelson said. "These include the lower educated, people below the poverty level, American Indians and Alaskan Natives," he said.

Nelson thinks these new statistics show that the effort to get people to stop smoking has been largely successful. "Our efforts are being successful over the long run," he said. "We have a pretty clear sense of what helps to reduce smoking prevalence. This includes a combination of comprehensive programs such as anti-smoking media campaigns, price increases, and cessation services."

Nelson also said the reduction in smoking among adults 18 to 24 is largely due to publicly funded efforts to reduce smoking. "We are reaping the rewards of the investments in programs that were strong in the late 1990s and the early part of this century," he said. "Unfortunately, states have drastically cut back on programs."