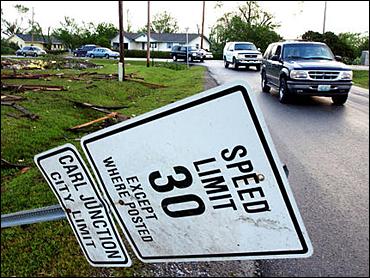 Raising the speed limit to 70 mph or more increases the risk of driving-related deaths for women and the elderly, but not for younger men, a study has found.

While states that raised their speed limits experienced no increase in the overall number of traffic-related deaths, fatalities per 100,000 people rose 10 percent for women and 13 percent for the elderly, researchers found. There was no increase for men under the age of 65, says the study, which appears in the June issue of the journal Economics Letters.

The study doesn't explain the reasons for the difference, but co-author Thomas Dee, an assistant economics professor at Swarthmore College, theorizes that a higher speed limit increases the disparity of driving speeds and thus the risk of accidents.

"The conventional view is often that speed kills. But some people ... would argue that the variance of speed kills," Dee said Wednesday.

"When you set (the speed limit) at an appropriate level, you have a higher compliance with the speed limit, less weaving in and out of traffic ... a safer driving environment," Skrum said.

While highway deaths may be increasing for women and the elderly, men are still killed on the roads in far greater numbers. Nearly 28,000 men died in automobile crashes in 2001, compared with more than 13,000 women, according to government statistics.