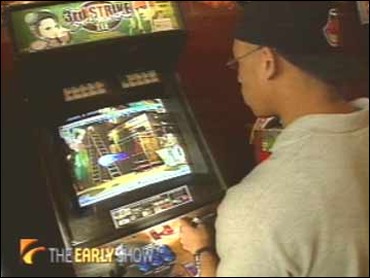 A new study concludes that watching lots of violence on television and playing violent video games not only makes kids more physically aggressive, it also makes them meaner and more distrustful.

The findings add a troubling new dimension to an existing body of research linking violence in the media with overtly violent behavior in children and adults, according to David Walsh, co-author of the study and head of the National Institute on Media and the Family, a private group which issues an annual report card on video and computer games.

The report found a correlation between kids' exposure to high levels of TV and video game violence and what researchers called "relational aggression" - behavior that includes name-calling, making threats and spreading rumors.

In addition, these same children were more likely to view others with the greatest amount of suspicion.

"Long before kids throw a punch or pick up a weapon, they're probably treating kids in a relationally aggressive way," says Walsh. "This is the kind of thing that becomes the breeding ground for more overtly violent behavior as these kids get older."

The six-month study is based on evaluations of 219 Minnesota children in the third, fourth and fifth grades, taken from a combination of public and private schools in urban, suburban and rural areas.

The youngsters filled out surveys of their TV viewing and video-game habits, and were evaluated by their own teachers and peers in terms of how well they get along with others. They also took a standardized test used to rate individuals' level of trust and suspicion of others.

Children rated the most ill-behaved reported more exposure to overall media violence and a greater preference for violence than other youngsters. They also played more video games and tended to favor more violence in those games, the study found.

These trends increased with the age of the children.

"They become desensitized and watch more," Walsh said. "Concerns about a growing culture of 'incivility' in society may be starting with our children."

The study was conducted by researchers from Brigham Young University in Provo, Utah, St. Mary's University at Minneapolis and the Minneapolis-based National Institute on Media and the Family.

Walsh said the study was presented to an international behavioral development conference Aug. 6 in Ottawa, Canada.