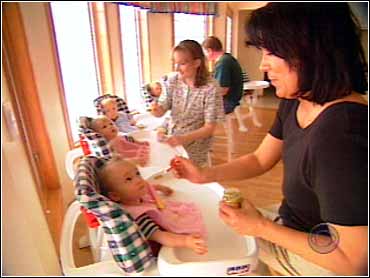 Which method is best when it comes to treating infertility?

The study concluded that the most common method -- inducing ovulation -- carries a significant risk of producing unwanted multiple births, even when doctors carefully follow the standard guidelines.

“It is time to rethink the way we are doing things,” says Dr. Norbert Gleisher, author of the study, which appears in Thursday’s edition of the New England Journal of Medicine.

The researchers concluded that the only way of lowering the chances of producing triplets or more is to give less ovary-stimulating drugs, but this also significantly decreases the chance of producing a baby.

Gleicher, of the Center for Human Reproduction in Chicago and New York, and other experts reviewed data from the treatment of 1,494 women. The treatments resulted in 314 single babies, 88 twins, 22 triplets, 10 quadruplets, five quintuplets and two sextuplets.

Doctors attempt to reduce the chances of so-called high-order multiple gestation triplets or more by monitoring the ovaries' egg production and checking blood hormone levels. However, these methods are imperfect, and the researchers concluded that one standard tool, ultrasound scans, is essentially worthless.

Cutting back on gonadotropins reduced the chances of multiple births, Gleicher said, but “that would give you such a low pregnancy rate that no patient would accept this treatment.”

The researchers recommended that doctors instead rely exclusively on in vitro fertilization. With that method, two embryos typically are conceived outside the woman's body and then implanted in her uterus.

Then, “the patient and we control that risk because we decide together how many embryos are to be transferred into the woman's uterus,” said Dr. Gleicher.

And other fertility experts agree, saying huge advances made in in vitro technology are making it a better choice, and no longer the treatment of last resort.

In an editorial accompanying the findings, Drs. Siladitya Bhattacharya and Allan Templeton of the University of Aberdeen in Scotland urged avoiding aggressive ovary stimulation and instead recommended in vitro fertilization to implant one or two embryos.

The leading complication from multiple pregnancies is prematurity leading to disabiity. The cost of caring for even one premature baby can reach into the millions of dollars. That thought terrified Pascale Karras.

“Deafness, blindness— to me it was a situation that seemed really unbearable.”

But Karras was lucky. She's having just one baby. Doctors hope to see more stories like hers, if in vitro becomes the standard of care.