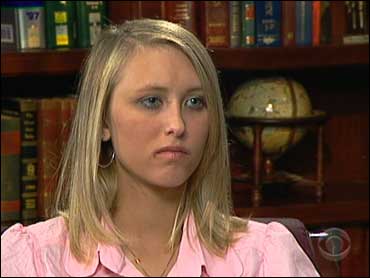 Most mothers and fathers are understandably concerned about whom their kids are dating - and here's a new reason: A survey of 11- to 14-year-olds finds more than six out of 10 know someone who's been verbally abused by a girlfriend or boyfriend. And one in five 13- and 14-year olds knows someone who's been in a physically abusive relationship. CBS News correspondent Kelly Wallace has more about this disturbing study.

"I really truly believe everything that he was doing to her, that she wouldn't be here today," Hightshoe said. "It's awful, it's the worse guilt any parent could ever have, not protecting your children."

What started with a date to the homecoming dance at age 14 quickly turned into a relationship filled with physical and sexual abuse.

It's still tough for Sami to talk about.

"What would he threaten?" Wallace asked.

"That if I don't take him back, he'll hurt my parents or hurt my family or my friends or me. I felt like my life was in jeopardy," Sami said.

A troubling new report finds Sami's story is not uncommon.

Dating is starting earlier, and often with serious consequences. More than one-in-three 11- to 12-year-olds say they have had a boyfriend or girlfriend. And nearly seven in 10 teens who had sex by the age of 14 say they have been abused in a relationship.

"I think if we're seeing these tweens having relationship violence exposure early on in adolescence, it's pretty likely to carry forward. If you look at the cycle of violence, that's what happens," said Christine Forke of the Children's Hospital of Philadelphia.

A group of five teens ages 10 to 14 that Wallace spoke to say parents and teachers need to wake up.

"It's a very difficult to talk about and some teachers just don't want to go there," 11-year-old student Kehinde Dosunmu said.

Warning signs of an abusive teen relationship include a change in personality - such as nervousness around the boyfriend or girlfriend - and controlling behavior, including frequent phone calls and domination of free time.

Read more about the high states of teen dating at Couric & Co. blog.

"You need to be aware of what they are looking at on the Internet, who they're texting, and how involved they are with their boyfriend, girlfriend at that age," Hightshoe said. "You can potentially save their life if you were more involved."

Sami got a restraining order against her former boyfriend, but didn't press charges.

The National Association of Attorneys General is now calling on every state to teach teen dating violence in their schools - to help students like Sami.