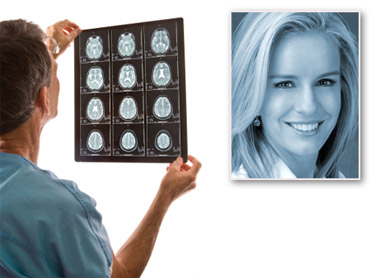 Almost 70 percent of the people in a recent British study who had a minor stroke weren't aware of it, and many didn't seek treatment until after it could have been most effective, increasing chances of serious problems later, says CBS News Medical Correspondent Dr. Jennifer Ashton.

The message: Know the signs, and seek treatment right away.

A stroke occurs when a blood vessel that carries oxygen and nutrients to the brain is either blocked by a clot or bursts, Ashton explains. When that happens, part of the brain can't get the blood (and oxygen) it needs, so it starts to die.

When brain cells die during a stroke, abilities controlled by that area of the brain are lost. Those abilities include speech, movement and memory. How a stroke patient is affected depends on where the stroke occurs in the brain and how much of the brain is damaged.

Stroke is the No. 3 killer in the United States and a leading cause of long-term, severe disability, According to the American Heart Association.

The new study, by the Stroke Prevention Research Unit in the Department of Clinical Neurology at the University of Oxford in the United Kingdom, looked at 1,000 people who had transient ischemic attacks (TIAs), also generally known as warning strokes and minor strokes.

TIAs are caused by clots. The only difference between a bigger stroke and a TIA is that, with TIA, the blockage is transient (temporary), Ashton says. While TIAs and minor strokes don't usually cause permanent brain damage, early treatment can lower the risk of a more serious stroke, she adds.

Warning strokes mean someone is at risk for a more serious and debilitating stroke. According to the National Institutes of Health, about a-third of those who had a minor strike will have another stroke in the future. It's important to get treatment RIGHT away, Ashton emphasizes, because "time lost is brain lost."

And almost a-third of the people in the study didn't recognize their symptoms as those of a minor stroke and delayed seeking medical attention for more than 24 hours.

Unlike a heart attack, which sometimes can be sudden or come with extreme chest pain, the warning signs of stroke can often be difficult to recognize, Ashton points out. However, if you know about the warning signs, and you or a loved one experiences more than one of them, that person needs to get to the hospital ASAP.

The warning signs are:

Sudden numbness or weakness of the face, arm or leg, especially on one side of the body
Sudden confusion, trouble speaking or understanding
Sudden vision difficulty - trouble seeing in one or both eyes
Sudden trouble walking, dizziness, loss of balance or coordination
Sudden, severe headache with no known cause

Women under 55 can have some stroke risk factors, the American Heart Association says.

Migraines: Recent research shows that women who suffer from migraines with aura (visual disturbances such as flashing dots or blind spots) can be up to 10 times more likely to suffer a stroke, depending on other risk factors.

Birth Control Pills: Women who take even a low-estrogen birth control pill may be twice as likely to have a stroke as those who don't and the risk may increase if other risk factors are present.
Hormone Replacement Therapy: Women who take hormone replacement therapy may have a slightly increased stroke risk.

Autoimmune diseases such as diabetes or lupus can increase the risk of stroke.

Clotting disorders: Women who've had more than one miscarriage may be at higher risk for blood clots, which can increase their chance of a stroke. Other signs of a possible clotting disorder can include previous history of clots in the legs (deep vein thrombosis) and livedo reticularis, a mottled purplish discoloration of the skin.

Risk factors for everyone

Among those cited by the American Heart Association:

Diabetes: Diabetes is an independent risk factor for stroke. Many people with diabetes also have high blood pressure, high blood cholesterol and are overweight. This increases their risk even more. While diabetes is treatable, the presence of the disease still increases your risk of stroke.

Atrial fibrillation: This heart rhythm disorder raises the risk for stroke. The heart's upper chambers quiver instead of beating effectively, which can let the blood pool and clot. If a clot breaks off, enters the bloodstream and lodges in an artery leading to the brain, a stroke results.

Other heart disease: People with coronary heart disease or heart failure have a higher risk of stroke than those with hearts that work normally. Dilated cardiomyopathy (an enlarged heart), heart valve disease and some types of congenital heart defects also raise the risk of stroke.

High cholesterol: People with high blood cholesterol have an increased risk for stroke. Also, it appears that low HDL ("good") cholesterol is a risk factor for stroke in men, but more data are needed to verify its effect in women.

Physical inactivity and obesity: Being inactive, obese or both can increase your risk of high blood pressure, high blood cholesterol, diabetes, heart disease and stroke. So go on a brisk walk, take the stairs, and do whatever you can to make your life more active. Try to get a total of at least 30 minutes of activity on most or all days.