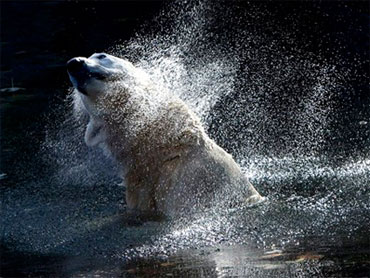 On average, 52 species of mammals, birds and amphibians are taking a significant step toward extinction each year, a huge new analysis says.

But if not for conservation efforts, the march would be even faster, researchers reported Tuesday.

Efforts to save endangered animals are making a difference, even as about 1 in 5 of the world's backboned species - mammals, birds, reptiles, amphibians and fish - are threatened with extinction, according to a study published online in the journal Science.

The report was released as delegates from more than 190 nations meet at a United Nations conference in Nagoya, Japan, to set 20 measurable targets to combat the loss of many diverse species.

"Our results should be a timely wake-up call to governments in Nagoya," said Stuart Butchart, a study author and global research coordinator at BirdLife International. "Biodiversity is in a desperate state. Its situation is getting worse . but our results show we can turn the situation around. We just need greater political will and resources."

The study considered almost 26,000 species of vertebrates - animals with a backbone - whose conservation status is on the "Red List" of the International Union for Conservation of Nature. It found that about one-fifth of vertebrate species are "threatened," meaning they are close to going extinct in the near future. That ranges from 13 percent of birds to 41 percent of amphibians.

The one-fifth number isn't much of a surprise, but the new study is the first global audit of vertebrates, said Craig Hilton-Taylor of the IUCN, a study author.

To look for trends, the authors used a statistical measure that tracks how particular species have moved among the eight categories of the Red List - an indication of improvement or worsening of their conservation status. Because of data limitations, they focused on birds, mammals and amphibians. Their results translate to an average of 52 species moving one category closer to extinction each year.

Amphibians, which include frogs and salamanders, showed the fastest decline, with mammals second. The trend was less severe for birds, but still included creatures like the green-colored Hose's broadbill of Malaysia and Indonesia, which has suffered declines in its forest habitat.

About 1 in 6 declines in conservation status in the study resulted in extinction, the authors said. The extinctions include the golden toad of Costa Rica and a Hawaiian forest bird called the Kamao.

Humpback whales, for example, moved from "vulnerable" to being at low risk for extinction because of protections against commercial whaling, the authors said.

In all, the researchers calculated that the overall march toward extinction would have been some 20 percent faster if no conservation steps had been taken. But they also said the true impact is much greater than their calculations could show.

"Conservation is working, it's just not enough" at current levels, said Ana Rodrigues of the Center for Evolutionary and Functional Ecology in Montpellier, France, a study author.

Stuart Pimm, a conservation expert at Duke University who didn't participate in the study, agreed that the results contain good news.

"A lot of those species would have been moving a lot faster (toward extinction) if it weren't for conservation efforts," he said. "Conservation efforts really do work, they're just not stemming the full extent of the losses of species. The overall trend is still downhill."