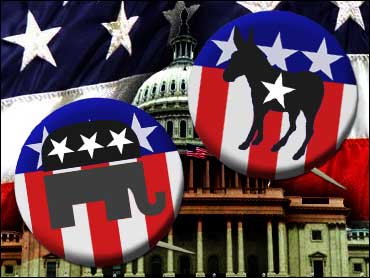 However, as Democratic strategist Jamal Simmons pointed out on "The Early Show," the same poll respondents, when asked who was better at job creation, Congressional Republicans or Congressional Democrats, favored the Democrats.

"So what's starting to happen now, which wasn't happening most of the year, is that Democrats are starting to advertise - that's the difference," Simmons told Early Show" anchor Harry Smith.

"Republicans have been communicating in a vacuum for most of the year; now you've got Democrats engaged, and I think voters are going to be educated about the differences."

The story of Election Night will be whether it is a referendum of President Obama midway through his term, or whether races will be decided by local figures and issues. "If it's held district-by-district," said Simons, "Democrats have a fighting chance. If it's a referendum on how the White House has been communicating or how Democrats have been communicating over the last two years, I think Democrats will have a tougher night.

"That's what's so interesting about the polling numbers - people look at the generic polls, but if I'm running a campaign in Madison, Wis., I care a lot more how my candidate is doing versus their candidate than I care about what the national mood seems to look like."

Some Democrats are fighting their conservative opponents by flooding the airwaves with ads attacking their opponents' tax records and personal lives.

But both sides can play at that game, and one veteran ad watcher told Cordes that things are getting nastier faster than in any previous campaign season.

"Every time a young president in his first term has a midterm election, it always becomes a referendum on that president," Bartlett told Smith. "And with the numbers that we're seeing both across the country on the economy, his personal approval rating being well below 50% now, this is a real challenge for the Democrats, and having the big guns go out across the country is an interesting strategy because many of these Democrats in these swing states and other districts want to run as far away as possible from this president."

Simmons said while Democrats face a rough Election Day ("We're going to lose scores of seats"), it is too early to tell whether Republicans will be able to win control in Congress &0151; and there are two months to go.

Bartlett said he does believe the House will flip to the Republicans, though he said, "Many Republicans would hope the election were this week or maybe next week."

Bartlett added, "The fundamentals of this campaign and what got us to this place and what got the president and Democrats in Congress in this place aren't going to change, whether it be the economic outlook, the right track, wrong track, the president's approval rating. These are all very important signals or gauges for us to look at, and right now, I don't see him changing that fundamentally.

"So I believe we will see the House of Representatives flip. I think it is much closer in the Senate but right now Republicans, as long as they play a smart campaign, you know, be very disciplined down the stretch of this campaign, this should be a good night for the Republicans in the House."