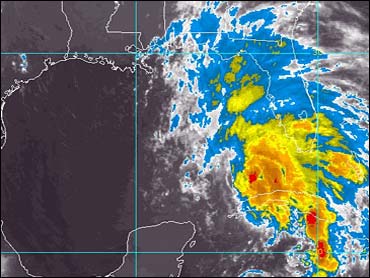 A tropical storm warning was issued Friday for central Louisiana to the Florida Panhandle as a storm lashing Cuba prepared to move into the Gulf of Mexico.

While Tropical Storm Arlene is the first named storm of the Atlantic hurricane season, the memories of last season are still fresh for Floridians, reports Carey Codd of CBS Station WFOR from Pompano Beach, Fla. Arlene's early rain bands arrived as a warning of the season ahead. High winds whipped waves along popular beaches with dark clouds threatening the storm to come. Residents from Florida to Louisiana are now being warned to stay alert.

Arlene was centered about 10 miles south-southeast of the western tip of Cuba at 5 a.m. EDT. It was moving north about 8 mph, and could cross near or over western Cuba as it moved into the Gulf of Mexico early Friday, forecasters said.

Wind and rain extended 140 miles to the north and east from the storm's center.

Arlene had maximum sustained winds of 45 mph. The storm could drop as much as 5 to 10 inches of rain, and possibly cause flooding in western Cuba and tornados in southwest Florida and the Florida Keys, meteorologists said.

"This is going to be a major rainfall event before and ahead of the storm," said Trisha Wallace, a meteorologist at the National Hurricane Center in Miami.

The Cuban government issued a tropical storm warning for the western province of Pinar Del Rio to the capital of Havana. A tropical storm warning was also in effect for the Dry Tortugas, a cluster of islands about 70 miles west of Key West that comprise a U.S. national park. Other than park personnel, there are no permanent residents.

The storm was not expected to develop into a hurricane before making landfall, Wallace said.

Hurricane season began June 1 and ends Nov. 30. Last season, Florida was struck by hurricanes Charley, Frances, Ivan and Jeanne; between them, the four storms damaged one out of every five homes in the state. The storms caused about 130 deaths in the United States and are blamed for $22 billion in insured damage.