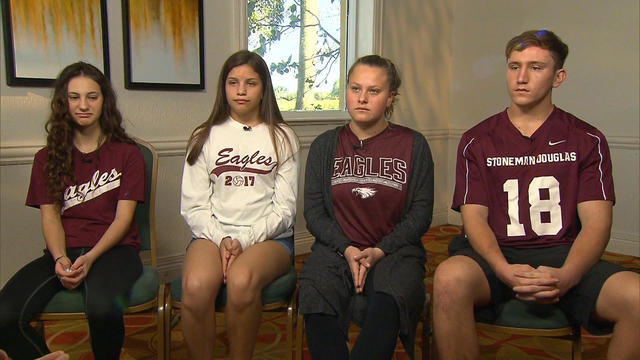 In the aftermath of Wednesday's deadly shooting at a Florida high school, students are sharing the horror of what the witnessed, remembering the heroic coach who lost his life protecting students, and finding strength in each other. With permission from their parents, "CBS Evening News" anchor Jeff Glor spoke with Marjory Stoneman Douglas High School senior Jack Haimowitz, sophomore Ariana Calamia, freshman Kelsey Friend, and sophomore Sierra Damiani.

"We realized it was an active shooter and information just started pouring in about kids being shot and one of my best friends was in the building and she wasn't answering and I just didn't know if any of them were okay," Sierra said.

"Everyone would never think this could happen to a school but things are possible that can harm anyone," Ariana said.

All four of them said they lost someone in the massacre that claimed 17 lives.

"I lost family. Every single person in that building that was touched – that just shouldn't happen," Jack said.

Assistant football coach Aaron Feis was shot and killed while apparently shielding students from the gunman. Three of the four students knew him personally.

"He was different that normal faculty. He was our friend. He truly cared," Sierra said.

"I don't have a single negative memory of him and every single time I saw him, it was just a feeling of I wish I could do more. I wish I said more, I wish I told him how much he meant to us," Jack added. "He would do anything for us and that proved it. I just wish that he didn't have to do that to prove it."

The suspected gunman, 19-year-old Nikolas Cruz, was charged with 17 counts of premeditated murder Thursday. The teen had been expelled from Stoneman Douglas and has been described by many as having a troubled past. Jack has known Cruz since sixth grade.

"He's always been around, I used to always hear stories about him throwing rocks through windows, pulling the fire alarm for fun. No one was really too close to him because it was always assumed that if this were to happen, it'd be him," Jack said. "Someone having the ability to instill that much terror in the people I love hurts."

Despite the terror they've been through, the students are thankful for each other and the peers they call family.

"I believe that Stoneman Douglas is still a safe school 'cause we are a huge family and through this whole ordeal we will be brave and fight," Kelsey said.

"If we all see each other again, we might feel more at home," Ariana said.