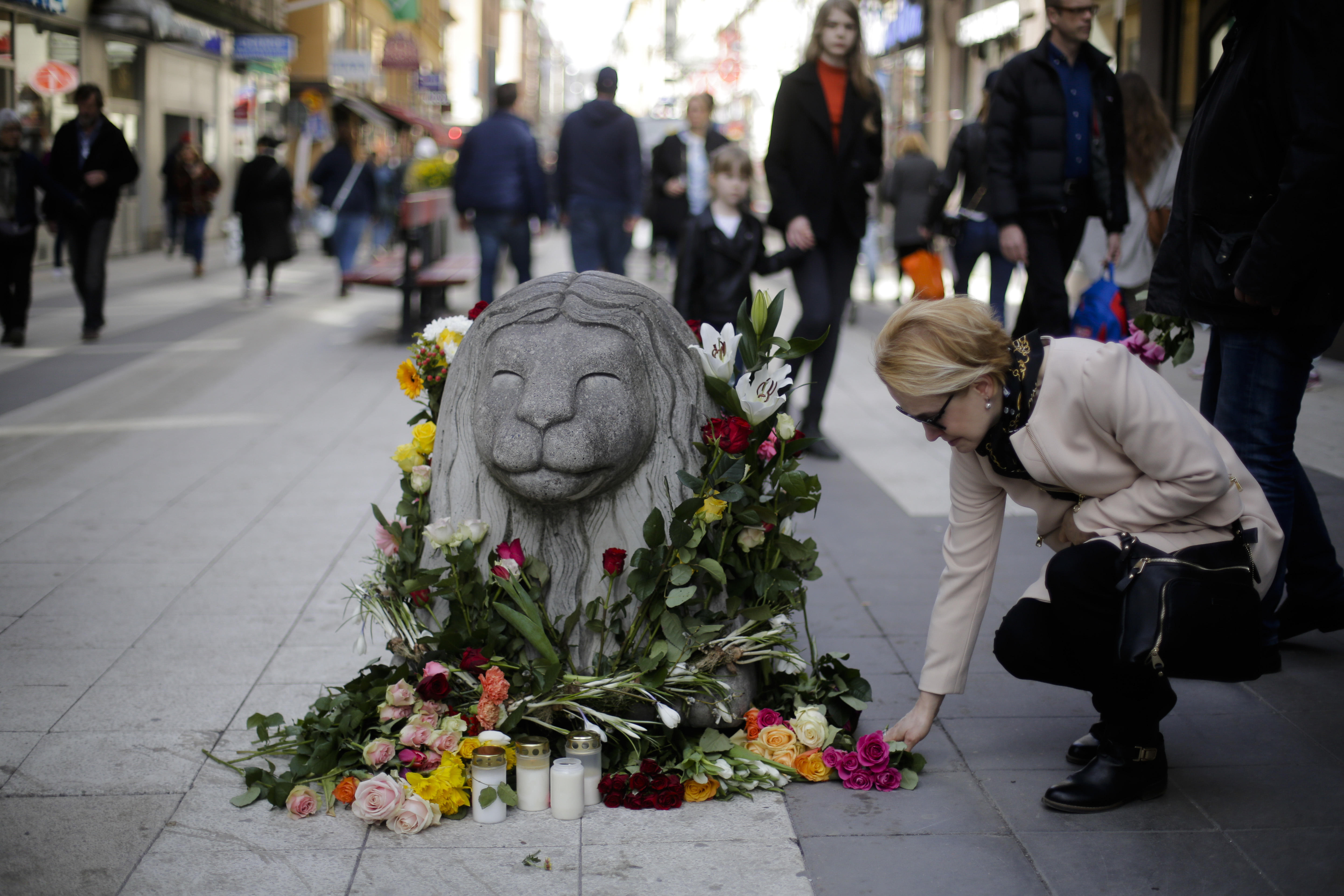 STOCKHOLM -- The Stockholm truck attack suspect was a rejected asylum seeker from Uzbekistan who eluded authorities’ attempts to deport him by giving police a wrong address, Swedish police said Sunday while announcing the arrest of a second suspect.

Jan Evensson of the Stockholm police told a news conference that the 39-year-old suspect’s request for a residence permit was rejected in June 2016, but police could not find him to send him back to his native country because he was not at the address he had given. Swedish police started formally seeking him on Feb. 24.

“We know he has been sympathetic to extremist organizations,” said Jonas Hysing of Sweden’s national police. He declined to name the suspect, who was arrested within hours of Friday’s attack on shoppers in Stockholm.

A second person has been arrested in connection with the attack and is suspected of terrorist offenses, including murder, spokeswoman Karin Rosander told The Associated Press. She did not give further details about the new suspect. Four others were being held by police.

Evensson said authorities have questioned more than 500 people in the investigation so far.

The four victims killed in Friday’s attack, in which a hijacked beer truck was driven into an upscale department store, included a British man, a Belgian woman and two Swedes, authorities in those countries said. Their identities were not released by Swedish officials.

The British government named the Briton as Chris Bevington, an executive at Swedish music-streaming service Spotify. Britain’s Press Association news agency said he was 41. In Brussels, the Belga news agency said the Belgian woman had been reported missing before she was identified by her identity papers and later by DNA testing.

As of Sunday, 10 of the 15 people wounded in the truck attack in the Swedish capital remained hospitalized, including one child. Stockholm county spokesman Patrik Soderberg said four of the 10 were considered “seriously” injured and the remaining six, including the child, were slightly injured.

Soderberg said it was important that caregivers continue to give “long-term psychological support to those who need it.”

One of the wounded, an 83-year-old Romanian woman who was begging on the city’s pedestrian Drottninggatan shopping street when the attack took place, says she was “surprised” that passers-by helped her.

“I thought everyone would run past me and save themselves,” Papusa Ciuraru, whose foot was crushed by a boulder displaced by the speeding truck, told the Expressen daily.

Speaking from her bed at the Saint Goran hospital in Stockholm, she said she “thought a war was going on” because “people around me were screaming.”

The lion-shaped boulders on Drottninggatan are meant as roadblocks and have been put up in several European capitals after a truck attack last year killed 12 people at a Christmas market in Berlin.

Ciuraru, who expects to be released Monday from the hospital, said she “tried to get up and run, but got a huge rock over my leg.”

On Sunday, tens of thousands of people gathered in bright sunshine on the downtown Sergelstorg square, near the site of the truck crash, for a memorial rally.

Rickard Sjoberg, one of the organizers, told the crowd there were probably people from out of town among them. “But today, we’re all Stockholmers,” he said to huge applause.

However, the attack left Swedes divided.

“You have one (side) saying ‘This is enough, we can’t have this. We must close the borders, throw everyone out,’” said Ulf Lundgren, a clergyman at Stockholm Cathedral. “Others say, ‘You can’t get security by closing the borders.’”

Stockholm seemed to be returning to normal slowly Sunday. Flags on most public buildings, including Parliament and the Royal Palace, flew at full-staff.

“If people who are here, seeking asylum, and treat us like this, it is not good,” Stockholm resident Lars Holm, 73, said after attending a service at the cathedral. “So now we have to have more security in our society, but still we don’t like to live in bunkers. We want to have, as before, a free life and we welcome people from abroad.”

The upscale department store that was rammed Friday by the truck apologized for an announcement that it would reopen two days after the deadly attack to sell damaged goods at a “reduced price.”

The Ahlens store described it as “a bad decision” on its Facebook page, saying its motivation “was born out of the idea of standing up for transparency and not allowing evil forces take control of our lives.”

The store said it would reopen Monday “without any damaged goods.”

A fire broke out Friday afternoon at the store after the truck smashed into shoppers at its entrance on Drottninggatan street. It was quickly put out by firefighters.

Police held raids overnight to bring other people in for questioning as authorities investigated the deadliest attack in Stockholm in years. Sweden’s SAPO security police said it was working to find “any abettor or network involved in the attack.”

“We have a lot of people who are being taken to police offices throughout Stockholm for questioning,” police spokesman Kjell Lindgren told The Associated Press. “(We are doing) all the things that are necessary to make a good investigation. That means we are going to continue to check objects, people, vehicles and so on.”

Stockholm city officials, meanwhile, had moved thousands of flowers at a makeshift memorial to a nearby square after an aluminum fence outside the Ahlens store was overwhelmed with tributes and threatened to collapse.

The fence had been put up to keep people away from the broken glass and twisted metal at the attack site, and to allow forensic experts and police to gather evidence.

Huge boards covered the store’s damaged front, where mourners had scribbled messages of sadness and encouragement to continue with their normal lives despite the attacks.

Thousands of people have visited the Stockholm crash site, including the prime minister, several government officials and Sweden’s crown princess, to lay flowers and light candles in memory of the truck attack victims.