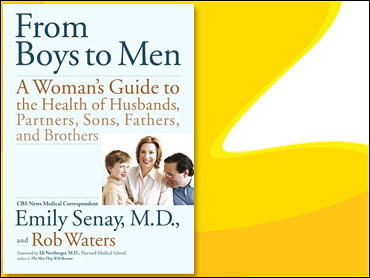 With summer just around the corner, many youngters are taking their bikes out of the garage and getting out on the ballfield. But it's parents who play a huge part in a child's success in sports.

In her new book, "From Boys to Men," The Early Show medical correspondent Dr. Emily Senay devotes a chapter to the importance of sports in a boy's life.

On The Saturday Early Show, Senay explained how parents can help their children get involved in sports and have a good time doing it.

Senay says sports are important to boys because they give them a healthy way to channel their intense physicality and make them feel strong. Sports also help boys develop a sense of confidence and the satisfaction of working as a team. But, the main reason that kids like sports is much simpler: they're fun. Sure it can be fun to surf the Internet or play video games, but the advantage of sports is that your child stays active and physically fit.

Senay says parents should get their kids involved in sports at a young age. When you see that your child is starting to run around a bit, picking up objects and throwing them, find some constructive ways to release their energy. Activities such as bike rides or running races down the street or in the park show your child the importance and fun of being physical. Physical activities also give the parent a chance to spend time with their children.

During your boy's early years, Senay recommends that you introduce him to different sports activities such as kicking soccer balls, shooting basketballs into low baskets, and playing with bats and wiffle balls. Also you may want to bring him to a basic swimming class so he can get comfortable in the water, or to a gymnastics class. But, Senay warns, its really important to not get competitive during this time. Your main concern, as a parent, should be to introduce the kids to different activities and learn where their interests lie. It's also important to remember that boys from age 2 to 5 have short attention spans, limited hand-eye coordination, and a hard time tracking moving objects and judging the speed.

Senay says as healthy and fun as sports are for many kids, there are some problems that need to be addressed by parents. Today's kids are being pressed at very young ages to get serious and specialize in one sport, instead of taking part in and enjoying many on a more casual basis. Because so many kids now play a single sport all year long, overuse injuries from performing the same movement repeatedly are rising dramatically. From every quarter, the pressure to compete, to be the best, gets more intense. For many boys, the macho risk-taking culture that surrounds competitive sports in high school and college leads them to ignore pain, drink and binge on alcohol, and act in sexist, disrespectful and sometimes violent ways toward women and others.

It's really important for parents to take part in their child's interest in sports, says Senay. Often this involves actually playing sports with them, especially when they're young, even if you don't consider yourself a good athlete. What matters most is that you're doing it together and that your boy is having fun. As he gets older, and he begins to participate in organized sports, you obviously don't have to be so hands-on with him. But, Senay says, always encourage him.

Senay recommends parents not to pressure their child in sports. As much as teammates and coaches can pressure a child to perform well, parents are usually largely to blame. Senay says it's alright to enroll your children in classes and sign them up for lessons, but parents should pay close attention to their child's interest level and give them the option to continue. If you keep the pressure off your boy to stay with lessons, he'll be more inclined to stay interested in sports because he's having fun while learning the basic skills and rules.

Senay says parents see many young athletes being thrust into a very public stage, making a lot of money, which causes them to think their child is capable of the same thing. But the truth is, not everyone can become the next Tiger Woods or LeBron James. If your boy is being pushed too hard to succeed in one sport, he may end up quitting because the sport he once enjoyed is now a task.

As the child gets older and gets involved in organized sports, the pressure becomes more intense with parents yelling at them during the games, or yelling at the coaches for not giving their son enough playing time. Senay says this can have a really negative effect on your child's self-esteem and force him to abandon sports all together. So, as important as it is to keep your kids active and interested in sports, pressuring them will not help.

Each year, according to the U.S. Consumer Product Safety Commission, more than 3.5 million children under 15 are injured playing sports, badly enough to require medical treatment. And more importantly, doctors are noticing a rising trend in "overuse" injuries caused by doing too much, too soon, too fast. Overuse injuries damage the body muscles, ligaments, tendons and bones by stressing them beyond their capacity with repeated or prolonged movements.

Intense training regimens on kids whose bodies are not fully developed can really impact their physical ability and cause some real damage. And, Senay says, parents need to be on the lookout for more traditional injuries -- concussions, fractures, dislocations and bruises -- especially if your child is playing contact sports such as football or hockey.

The rise in popularity of extreme sports such as skateboarding and snowboarding can result in some serious injuries. Senay says if your boy comes home from practice one night limping around, or you notice a bruise on his body, don't brush it off, because your boy may try to do so. Kids tend to take injuries lightly, but parents should not.

Experts estimate that half of all sports injuries are preventable. Senay says one of the best ways to prevent injuries is by making sure your boy is wearing the right gear for the right sport. When he is out riding his bike, make sure he's wearing his helmet. Also, make sure he's wearing the proper footwear to protect his ankles and the right pads for contact sports. In addition, make sure kids are properly supervised, encourage rest breaks, offer lots of fluids and discourage kids from playing through an injury.