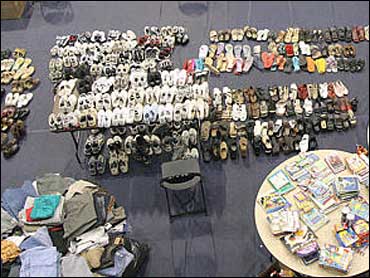 With a shattered New Orleans all but emptied out, an unprecedented refugee crisis unfolded across the United States, as governors and emergency officials rushed to feed, clothe and shelter more than a half million people dispossessed by Hurricane Katrina.

In Texas, where nearly a quarter-million refugees have filled the state's relief centers, Gov. Rick Perry on Monday ordered emergency officials to airlift some evacuees to other states willing to take them. Among the states that have offered help are West Virginia, Utah, Oklahoma, Michigan, Iowa, New York and Pennsylvania.

"There are shelters set up in other states that are sitting empty while thousands arrive in Texas by the day, if not the hour," Perry said. "To meet this enormous need, we need help from other states."

"We want to get the children back in school as quickly as possible, whether they are staying with relatives, or friends or in a shelter," said Caron Blanton, a spokeswoman for the Mississippi Department of Education. Mississippi, like Alabama, Florida, Texas and other states, has pledged to open its schools to displaced children and waive normal entry requirements such as immunization records and proof of residency.

In Fort Chaffee, Arkansas, relief workers turned the post where Elvis Presley entered the Army in 1958 into a processing center for victims. There, the homeless were registered by the Social Security Administration, checked by doctors and given post office boxes.

Marion Landry, 84, held onto the walker of her sister, Fay Roberts, 81, as the bedraggled pair went through the registration process. They appreciated the need for paperwork — but really wanted a shower.

"I've worn the same set of clothes for three days," Roberts said Saturday after arriving from New Orleans. "My hair is sweaty. I don't look like this. Normally I'm very nice."

A military base near Battle Creek, Michigan, was transforming itself into a welcome station.

Up to 500 evacuees were headed for the Fort Custer Training Center, where volunteer cooks were readying meals at a mess hall. Tables were stacked with towels, toiletries, T-shirts and other clothing and essentials. Medical personnel stood by to help, and clergy and attorneys were on call.

Michigan Gov. Jennifer Granholm said the victims are welcome to stay permanently, if they wish. "Michigan is going to welcome these victims, these evacuees, with open arms and show them some Northern hospitality," she said.

In New Mexico, Gov. Bill Richardson declared a state of emergency and released about $1 million to help victims of Katrina as the first of up to 6,000 evacuees arrived Sunday. He also relaxed certain state transportation rules to speed up the building of temporary housing for the refugees.

Victims also began arriving in Arizona, which has agreed to take up to 2,500. They were greeted on the runway by Phoenix Mayor Phil Gordon.

Several people had to be helped off the plane and down the stairway to the tarmac, where pink, yellow, teal and black flip-flops had been set out for them.

Then, carrying garbage bags, backpacks and brown shopping bags with their only belongings, the evacuees were led into the airport for physicals before boarding buses to the Veterans Memorial Coliseum.

"We'll take care of them," Gordon said. "We'll make sure they know that the city cares."

In Denver, Qwest Communications set up a bank of at least 50 phones at a processing center so victims could call their loved ones. Colorado state Rep. Debbie Stafford said she was trying to arrange long-term shelter for the storm's victims, and also reunite people with their cats and dogs.

In San Diego, about 80 hurricane evacuees cheered and sobbed with relief after arriving on a charter flight arranged by a California businessman, part of the first wave of refugees headed to the state.

In Los Angeles, Elaine West was among 10 evacuees who arrived early Sunday aboard a private jet. West said she fled her New Orleans home because of looters and gunfire that killed two of her neighbors.

"I don't see myself ever going back to New Orleans again," West, 52, a former candy maker, told the Los Angeles Times. "Even to visit."

State and local officials in Texas, Tennessee, Georgia and other states with an evacuee influx began setting up programs to link evacuees with employers. Business owners are trying to help, too.

In Richland, Mississippi, a fast-food restaurant hung fliers offering jobs at a shelter. A steel company sent employees to a shelter at the Mississippi Coliseum in Jackson to recruit new workers. And Craigslist, the Internet-based classified advertising service, was filled with job offers for victims willing to relocate.

Pene Long, who owns a spa in Richland, said she had given a stylist's job to a woman whose home in Biloxi was devastated. Long said she was going to hire nine more displaced people.

"I was getting ready to put a big ad in the paper, and I said, `Why would I do that?' There are tons of people out here looking for work," she said.

At the Houston Astrodome, evacuees were issued jeans, T-shirts, underwear, socks, hats, sneakers, sandals and other clothes, along with toiletries, aspirin, towels and other items. They were allowed to make free long-distance phone calls, courtesy of SBC Communications.

Torres Smith, 42, a machine operator at a New Orleans seafood plant before Katrina hit, was evacuated along with his wife and four children and is now sleeping on a cot in what used to be centerfield in the Astrodome.

"As far as I can tell, this is going to be our new home for a long time," he said. "I'll do anything--cut grass, wash windows, wax floors. I can't just sit around here, looking at people lying in their cots. I feel like I have to be a part of something positive."